On November 15, Susan G. Komen hosted a Facebook Live to encourage people to get their flu shot this season. The flu shot is especially important for people with weakened immune systems, including those who have had cancer treatments, because they’re more vulnerable to serious infection or complications.

“When you’re immunocompromised, your immune system doesn’t work quite as well as it should to fight off infections and diseases,” Beliles explained. “For example, those living with cancer, sometimes it’s because the cancer itself weakens the immune system and other times it’s because the treatments, such as chemotherapy, radiation, even immunotherapy, can weaken the immune system. That leaves these patients vulnerable to even the most commonplace germs. So, when you’re at greater risk of becoming ill from viruses and bacteria in your environment, they’re also at a greater risk for developing serious complications from those illnesses—so it’s really important to get that vaccine.”

Flu season generally runs from October to March, and the CDC recommended everyone over the age of six month receive a flu vaccine each year. According to Beliles, it’s recommended that people get the flu vaccine before the flu begins circulating in your community, usually by the end of October to help reduce the spread. The flu most commonly peaks in February, but it’s possible to get the flu year-round. “There are several different flu vaccines, so make sure you talk to your pharmacist or health care provider to determine which vaccine is right for you,” Beliles said.

According to Crouse-Miller, even though flu vaccines aren’t 100 percent effective, they are still important. “Vaccines reduce the severity of illness, they reduce the length of hospital stays and they reduce morbidity and mortality,” she said. “And the only way to know if you have the flu, or COVID, is to get tested. And the only way to prevent it is to get vaccinated.”

You can view the entire Facebook Live event here. 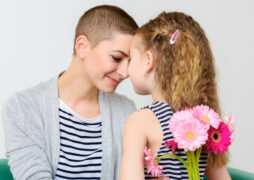 Why All Moms Should Know Their Breast Cancer Risk
April 20, 2022
Role of Local and Systemic Therapies for MBC Patients
April 20, 2022