Susan G. Komen has transformed how the world treats and talks about breast cancer and have helped turn millions of breast cancer patients into breast cancer survivors. Our work is not done. Support of this event will help us reach our Bold Goal of reducing the current number of breast cancer deaths by 50% in the United States by 2026.

Please join us on Wednesday, March 6, 2019 at Noon at the Belo Mansion & Pavilion to help us reach our vision of a world without breast cancer. Please click here to learn more about our lifesaving work

A SPECIAL THANK YOU TO OUR HONORARY CHAIR
AND LUNCHEON CHAIR!

Jimmy’s advocacy skills have served her well in numerous leadership roles in the community. She was the first woman to be appointed Chair of the Board of the Boys and Girls Club of Greater Dallas, and has been Chair of the Board of Dallas Children’s Advocacy Center, Chair of the Family Gateway Advisory Board, and member of the United Way of Metropolitan Dallas Board and its Executive Committee. She has also chaired The Domestic Violence Committee as a member of the Commission for Women, and was appointed to the Texas State Crime/Victim’s Institute Advisory Council.

Kameron Westcott grew up in Montecito, California and moved to Dallas, Texas in 2001 to attend Southern Methodist University. After receiving her Fine Arts Degree, Kameron worked in the fashion industry and today is a mother of two. Kameron is active member of Cattle Barons Ball and active member of Junior League of Dallas, serves on the council for Texas Ballet Theatre, and is a member at large for New Friends New Life Board. In 2008 she was a style Ambassador for Diffa Dallas. In 2009 she won D Magazines Top 10 Most Beautiful Women in Dallas Award. In 2015 she chaired the TuTu Chic Luncheon benefitting Texas Ballet Theatre, and chaired March of Dimes Signature Chefs Gala in 2016. Kameron loves to design clothing for her Yorkie named Louis, is obsessed with the color PINK, and enjoys spending time with her two children!

We are excited to share with you that our Luncheon speaker will be New York Times best-selling author and Good Morning America anchor, Amy Robach. 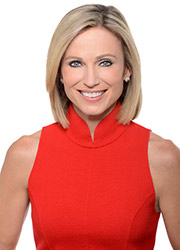 Since joining ABC News, Robach has traveled nationally and internationally to cover major news events. She reported from Brussels on the terrorist bombings in Belgium, Orlando, Florida on the mass shooting at Pulse nightclub, Dallas, TX to cover the shooting ambush of police officers, and on the ground in Newton, Connecticut for the Sandy Hook Elementary School shooting. Robach contributed to network-wide coverage on Election Night 2016 from Trump headquarters and the Washington Mall in Washington, DC for the 2017 Presidential Inauguration.

She also traveled to Iceland to report on the front lines of climate change with the world’s most elite ice climbers, taking viewers into an ice sinkhole over a hundred feet deep live using the latest in drone technology. As part of GMA’s Hidden Worlds series, she reported from Tanzania on the poaching epidemic and its impact across the globe. In 2014, she traveled to Nigeria to interview Malala Yousafzai, the seventeen-year-old who was in the African country as part of a campaign to free hundreds of captive school girls. She also reported live from South Africa just days after the shooting of Oscar Pistorious’ girlfriend Reeva Steenkamp. Robach anchored ABC News’ coverage of the 2016 Summer Olympics in Rio de Janeiro, Brazil, the 2014 Winter Olympics in Sochi, Russia and reported from London for the birth of Prince George.

Additionally, Robach has interviewed countless newsmakers and celebrities. Her headline making interviews include: Gretchen Carlson’s first television on sexual harassment in the workplace, Hulk Hogan who responded to making racial slurs and Monica Lewinsky, her first network interview in over a decade. She also sat down with Real Housewives of New Jersey’s Teresa Giudice after time spent in a federal prison and recording pop star Taylor Swift after her worldwide exclusive live-stream on Yahoo and ABC News announcing Swift’s new album and single.

Robach is originally from Lansing, Michigan. She grew up in St. Louis, Missouri and then moved down south to Atlanta, GA just before high school. Robach attended the University of Georgia where she graduated with honors and a degree in Broadcast Journalism. She currently resides in New York City with her husband, two daughters and is also the stepmom to three wonderful boys. 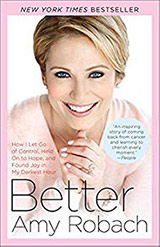 In 2015, Robach wrote a New York Times bestseller titled Better: How I Let Go of Control, Held On To Hope, and Found Joy in My Darkest Hour about her unexpected journey with breast cancer after being diagnosed following an on-air mammogram on GMA.

To learn more about this opportunity please contact Elizabeth Ashmore.

The estimated fair market value of benefits is $1,180 for this contribution level.

The estimated fair market value of benefits is $620 for this contribution level.

The estimated fair market value of benefits is $560 for this contribution level.

The estimated fair market value of benefits is $360 for this contribution level.

The estimated fair market value of benefits is $80 for this contribution level.

The estimated fair market value of benefits is $50 for this contribution level.

We can tailor an opportunity to meet your marketing needs. For more information on these opportunities, please contact Elizabeth Ashmore.