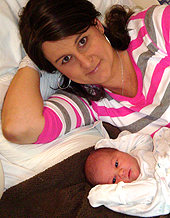 My wonderful husband and I were married in August of 2006 and immediately began trying to have children. In December of that year, we began using fertility drugs as we found we were not able to conceive naturally. After a year on these drugs, on January 12th, 2008, my 28th birthday, I got the best present of all. A positive pregnancy test! We were so excited and told our family and friends right away.

The pregnancy was perfect until I was about 27 weeks along and felt a very significant lump in my right breast. I chalked it up to changes in my breasts from the pregnancy. But, at my husbands urging, as he lost his mother to what started out as breast cancer when he was 13, I went to my doctor. She told me she was 99% sure it wasn’t cancer as it had grown too fast from the last time she had done a breast exam which was just a few months prior. But, she referred me to have an ultrasound anyways, and from there I was referred to a breast specialist who decided to do a biopsy.

The next day, I got the dreaded call. I had Invasive Ductal Carcinoma, grade 3, stage 2. I was numb. Shocked. Could not believe this was happening to me. Friends and family gathered around me in support. To this day I do not know what I would have done without them. My Doctors called it a pregnancy induced cancer. The cancer is fed by estrogen so by all the changes going on in my body from being pregnant, it triggered the cancer to grow. I began the first part of my treatment which was chemotherapy.

Since I was pregnant I could only have a certain kind of chemo called Adriamyacin. I went through 4 rounds of chemo with my baby girl in my belly. She was watched closely, and she continued to grow well while I was going through this. I began losing my hair in large clumps in early August and my husband and I decided it would just be easier to shave it off. He did it for me, and I will say that that was one of the most emotional days of both of our lives. I believe we are even stronger as a couple than we were before having gone through that together. I think that may be the hardest part of all of this for me. Losing your hair is horrible, especially as a 28 year old who was awarded Best Hair in high school!

On September 17th, I gave birth to my beautiful daughter, Mia Jillian. She is God’s gift to me and just an absolute angel. I would go through chemo every day for her, in a heartbeat. If getting cancer and going through all I’ve gone through is what I had to do to get her, then it was worth every second of it. When Mia was 11 days old, she participated in her first Race for the Cure, in Toledo, OH. My husband pushed her in her stroller on the family walk. Next year she may just be walking beside me, with me wearing the shirt of a Survivor.

Two weeks after Mia’s birth, I began chemo again. This time with the drugs Cytoxan and Taxol. I felt as if I had been hit by a bus. Then I began to lost my eyebrows and eyelashes, which again was extremely difficult. Its amazing how much not having those changes your appearance. On December 4th, 2008 I finished my last round of chemo, which was another extremely emotional day for me. What a feeling of relief it is having something like that behind you.

During all of this, it was decided that I should be tested for the BRCA gene mutation, because I was so young. Even though neither my Mom or Dad’s side has much significance of breast cancer, my test came back positive! I had a mutation on the BRCA2 gene. It was another huge shock. The social worker even said in her 10 years of working, she had never been more shocked by a result. So, after consulting with my Drs, we decided to do a bilateral mastectomy. My surgery is January 7th, 2009. 5 days before my 29th birthday.