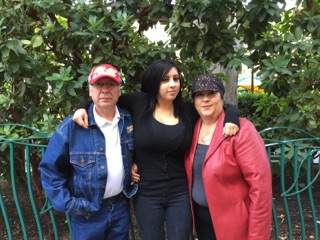 Hemophilia Was Not Enough

My story begins when I got married in 1989 and had three kids: two boys and one girl.

When my first child, Miguel, was born my life was filled with joy and happiness. When he turned two, he became very sick but the doctors didn’t know what was wrong. Five years passed and one day, he injured his knee. My husband and I took him to the hospital where he underwent many tests because his knee had been swollen for days at this point, but the doctors still had no answer. When Miguel was nine years old, one of his teeth fell out on a Friday and was still heavily bleeding the following Monday. That Monday morning I took him to school and informed the secretary about the situation. She then recommended I ask his doctor to test him for Hemophilia, a bleeding disorder. As it turned out, my son was diagnosed with Hemophilia that same week. My daughter was diagnosed as a carrier and four years later my youngest child was also diagnosed with Hemophilia.

These events changed my life forever. I questioned God why he was so cruel to my children. It was one of the toughest moments in my life, but I learned to cope with the disease.

Little did I know, my journey with diseases was not over just yet. Twelve years went by and on Thanksgiving of 2013 I felt a lump in my left breast, it was painful but I thought nothing of it. I was 42 and had not gotten a mammogram. As days and weeks went by, I began feeling the lump more and more to the point where it started to hurt. It wasn’t until January that I went to the doctor and got a mammogram. After my mammogram, I got a biopsy.

On January 21 of 2014, I received a phone call that would change my life once again. I was on the shuttle from work that takes me to the employee parking lot. My phone rang and once I answered, I knew something was wrong. Tears rushed down my face when I received the devastating news. I was diagnosed with Stage 2 breast cancer, but a rare type of cancer called Angio Sarcoma that is not commonly found in the breast. My initial reaction was to keep the news to myself, get in my car and kill myself. I already had cancer so I might as well end my life. After an emotional moment to myself, I called my husband and shared the news. He left work right away and went to our house. I proceeded to call my daughter after and shared the news with her as well. Eventually, I came home, hugged my family and cried. I cried like it was my last day with them.

On March 7 2014, I underwent the double mastectomy. The healing process was emotionally, physically and mentally painful. A month after the surgery, I went under the knife again and received a portacath for my chemotherapy. I did six rounds of chemotherapy. Each round was four days every two weeks. After my chemotherapy ended, I did six weeks of radiation.

On October 13, 2014, I finished my last day of radiation and the following night I went back to work. At the moment, I am still recovering from it all and my skin is burnt and delicate. My next appointment is in December. I thank God and my family for all the support they gave me during one of the two toughest phases in my life. I have a marvelous daughter who was with me the entire time taking care of me. I thank my daughter for all the help she has given me.