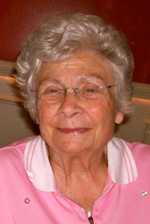 My name is Phyllis Longman. I am a former nurse and an 80 year old cancer survivor, and this is my story. When I was 56 years old, I was enjoying my life as a farmer’s wife, a mother of two grown children, and a grandmother.

It was then that I found a lump in my right breast while showering. After testing, it was diagnosed as Stage 2 breast cancer and I had a mastectomy. I did not want to go through chemotherapy treatment, so I opted to be included in a study for the drug Tamoxifen. I was on that for 10 years and then after took several other oral medications. I was being a survivor and still enjoying my life and my family.

Then, 15 years after my first mastectomy, during one of my mammograms they found a lump in my left breast. After further testing it was breast cancer again and I was scheduled for another mastectomy. I, along with my family, were filled with emotions of going through it all again and this time at an even older age – but I continued to have hope.

Then, the night before the surgery for the second mastectomy, I was called at 6:00PM by my surgeon with the news that further tests had revealed I was in Stage 4 bone cancer. My surgeon said if I wanted to postpone surgery I could and that she would understand. My husband and I were speechless for a moment not believing what we just heard, and then I asked if I would still need the second mastectomy with the news of being in the advanced stage of bone cancer and she said yes. I then said, “…we’ll just go ahead with the surgery tomorrow morning as planned.” – and that’s what we did.

My family really helped me through my recovery after this surgery, as I was at an older age and now a diabetic. Today, I still see an oncologist biweekly and I am on pain patches and an oral cancer medication. I am still going strong with the help of my devoted family and friends and after all I still have hope! My wish is for my story to strengthen other survivors’ hope as we all fight for a cure!