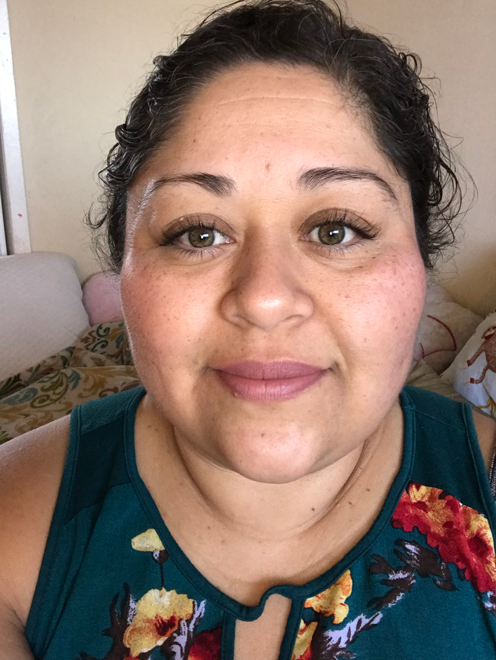 My name is Sonia Aguilar and I was 42 yrs old when I was diagnosed with breast cancer (still leaves a bad taste in my mouth to say it). I didn’t have a lump but I did have sharp stabbing pains in my left breast but I thought it was the anxiety and panic attacks causing it. Was in and out of ambulances and Emergency rooms due to the panic attacks. THANK GOD for my general doctors nurse, she noticed I had not had a mammogram since I was 37. At that time I had a mammogram because I had this brown liquid coming out of my left nipple. Also had an ultrasound but was told that it was an infected milk duct. Fast forward 5 years early November I went for the mammogram and 1 week later got called to come back for another mammogram and ultrasound. I will never forget, she told me “they saw something but are not sure” I was at a thrift store and my legs starting shaking, I got diarrhea and I started crying….I asked her “is it cancer”? She said “I can’t say anything”…..the appointment was scheduled for the next day..I went nervous and as scared as can be…before the mammogram started the tech said “the doctor will talk to you after” and I wondered “why does he need to talk to me??” And then I knew, during the ultrasound the tech stopped half way and went to call the radiologist…my heart was beating so fast and I already had tears in my eyes and he came in with a paper and he said those dreaded words “ we found something and it looks like it’s cancer” I felt numb and sick and terrified. I lost my mother to pancreatic cancer and my my middle brother (age 16) to testicular cancer so this was absolutely devastating to me. I was alone since they didn’t allow my son in there with me. I went ahead and had a biopsy done right there & then and it hurt like hell!!! I cried. Left feeling empty and lost and consumed with so many thoughts. My middle son (age 20) was waiting for me and I broke down. I couldn’t help it. Called my younger brother crying and told him. Called my husband and told him and went home and told my oldest son (age 21 & my 13 yr old daughter) these moments will never leave my mind as only I can recall their facial expression and their voices in hearing this diagnosis. Everything after that moved fast…met with my surgeon and in Dec.14th has a mastectomy on my left side and I’m still healing from this. I had 23 lymph nodes removed and 1 came back positive. I was diagnosed with early stage 2. Met with my oncologist and started hormone blockers. Now on April 24th I will be having a complete hysterectomy and later on I’m having my right breast removed (no tumor on right breast) There’s been a lot of tears ALOT But breast cancer is not a death sentence. I have to stay strong in my Faith and truly believe with my mind and heart and I am healed and have Faith that God has chosen the right doctors for me. I went back to the nurse that made my mammogram appointment and took her flowers and told her how thankful I was that if it wasn’t for her the cancer/tumor would not of been caught on time. I don’t take life for granted and I just celebrated my 43rd birthday. I’m thankful for God and my family and my health and for life itself. Always remember to stay positive although I know it’s hard…we all have good and bad days but keep your faith strong and remove all negativity from your life. Enjoy everything and find joy and happiness with everything.