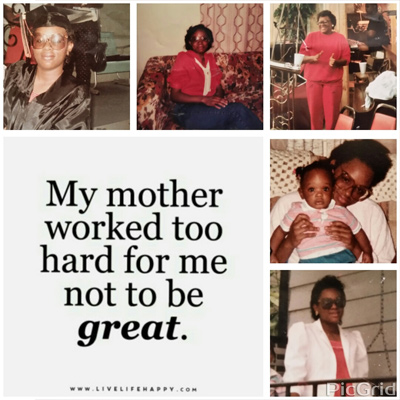 Her Life is My Story

My mother Angela was, and still is, a phenomenal woman! She was a wife, sister, daughter, mother, and friend. She was born on December 24th 1966 in Wilmington NC to Fannie and James Little and was the youngest of five siblings. At the age of 18 she graduated from New Hanover high school, where she also met her high school sweet heart, my father. Shortly after graduating, she gave birth to me and three years later had my brother. Determined to be successful and have a better life for her family, she and my father married and she started her own business, an in home daycare. She was passionate about family time, cooking, shopping, gardening, attending church, and writing.

In 1996, she discovered a lump in her breast. Nervous about what it could be she made arrangements to visit the doctor. After many test and countless visits to the hospital she learned that she had breast cancer. She started radiation treatment right away. Determined to beat the illness she became more aware of her health choices and remained optimistic. With much support from friends and family her faith remained strong. In 1997, after completing radiation treatments she went into remission. After a few months she started feeling ill again and decided not to take any chances by going back to the doctor for a follow up. During this time she learned that the cancerous cells had returned and they would have to act aggressively. She started chemotherapy treatments in combination with radiation. Things became rough as she experienced significant weight and hair loss.

On July 15th, 1998 she passed while my brother and I were away at summer camp, she was 31 years old. It was the most devastating news because it never crossed my mind that she would pass. Nevertheless, my prayers were answered, God healed her! She is no longer is she in pain or worried about her next treatment. While she is no longer here physically, I am blessed to have her as my permanent full time guardian angel! My mother chose to home school me when I entered the second grade. Many people questioned her decision but God knew that she would only be here on earth for a short time. My home school experience allowed me to spend extensive time with her. I learned so many things from her that are now vital in my life. It is such an honor to share my story with the hopes of inspiring others and most importantly honoring my mother, Angela Little!