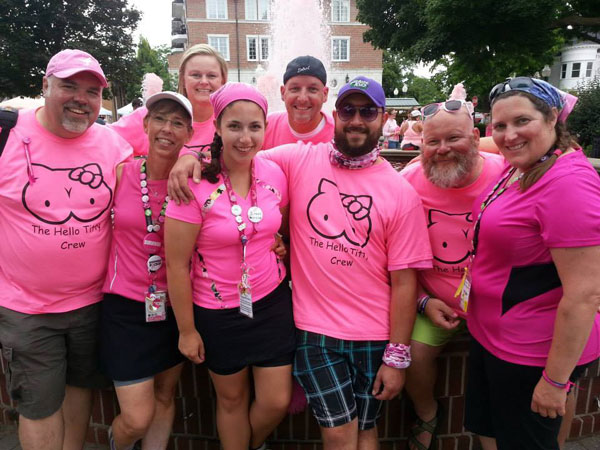 My breast cancer journey began when I found an enlarged lymph node on my side, below my armpit. A fine needle aspiration showed cancer cells; removal of the node presented as lymphoma according to my surgeon. Three days later, the surgeon called and told me (over the phone), that it was not lymphoma, but either pancreatic or ovarian cancer and if it was either one of those, it wasn’t good. I fired her immediately and had my results sent to a gynecological oncologist with whom I had a previous, unrelated experience. It wasn’t either one of those, but it was adenocarcinoma (cancer caused by a mucous producing organ), and we had to “turn over every rock” to find which organ was causing the cancer. I endured seven weeks of relentless testing – colonoscopy, endoscopy, bone scan, brain scan, uterine biopsy, ovarian scan, thyroid tests, mammograms, and breast MRI. Every test returned negative, and simply begat another test! During this time, we sent a tissue block to Memorial Sloan Kettering and the University of Chicago. Finally, we got a diagnosis – HER2 breast cancer. To top it off, I was also being held hostage by a horrible HMO doctor (loosely used term here…). Anyway, I finally convinced him to refer me to University of Chicago where Dr. Olufunmilayo (Funmi) I. Olopade accepted me as her patient. At this point, I was considered “cancer free” because the entire lymph node had been removed, something my new surgeon and I came to regret as the total removal made the diagnostics more difficult. But Dr. Olopade, her best surgeon Dr. Nora Jaskowiak, and I decided without a doubt that I should undergo treatment for breast cancer. Mind you, my children were 18, 13, and 8 at the time; of course I would have treatment. Too much risk to not have it; life insurance to go forward.

So, 4 rounds of A/C, once every three weeks; 12 rounds of Taxol/Herceptin, once a week; 40 rounds of Herceptin, once a week. It took me nearly an hour each way to commute to the hospital. I homeschooled all my children until they started college, so the time away was considerable and daunting. But we would deal with it. My children, husband, family, and friends were nothing short of amazing.

Following the 12 weeks of Taxol/Herceptin, I had a lymph node biopsy where 13 nodes were removed and they were all cancer-free! Then 31 days of radiation to be followed by 40 weeks of Herceptin. Now, here’s the good part! As I was preparing to face the 40 weeks, Dr. Olopade informed me that new research done at the University of Michigan, funded by Susan G. Komen, showed that one can have the same outcome receiving one treatment every 3 weeks over the course of 39 weeks. What! Are you sure? That’s 27 fewer infusions. 27 fewer times I had to leave my children. Life changing.

Seven years ago, my dear friend Susan formed team Believe in Now! and walked the Michigan 3-Day in my honor. Six years ago, I joined the team. Prior to joining. I spoke with both Dr. Olopade and Dr. Jaskowiak about Komen. I was about to put an unbelievable amount of time and energy into this event and wanted to be sure Komen was the right place. They both assured me that in spite of it’s flaws, (remember Planned Parenthood?), Komen was doing fantastic work and was, most assuredly worth whatever I had to give.

I believe in paying it forward. Someone walked for me. Someone helped fund that research which changed my treatment protocol. To this day, if asked, I participate in research studies to help pay it forward. Dr. Jaskowiak continues to believe in the Komen mission and so do I. Advances in research and early detection, funded by organizations like Susan G. Komen, will transform breast cancer from a frightening disease to a non-life threatening illness. More and more people will be cured, just like I am.

So there you have it. I have personally raised nearly $25,000.00 and our team, which has ranged from 2 to 5 people, is nearing the $60,000.00 mark. We are thrilled. So as I walk my sixth event, I’ll be joined by my 19 year old daughter walking her fourth and our teammate Jayson walking his second. We are so grateful for the opportunity to pay it forward.