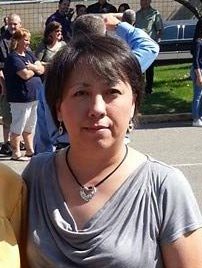 January 2015, I had my first routine mammogram. A few days later I received the dreaded phone call from my family doctor telling me that I needed to schedule a diagnostic mammogram. The had spotted some suspicious findings and needed more views to confirm that they were indeed “findings”. My journey to making the final decision to have a bilateral mastectomy is lengthy. I’ll spare you all the fine details. After having a stereotactic core needle biopsy (which was inconclusive), a lumpectomy (that confirmed Ductal Carcinoma In Situ), another mammogram with more findings in a separate quadrant, another stereotactic biopsy (again inconclusive), a visit with the oncologist and radiation oncologist, gene testing, and a second opinion with a new breast surgeon – a decision was made – seven weeks of radiation and Tamoxifen for 5 years. No chemotherapy, thank God. I was diagnosed with DCIS in two separate quadrants in the same breast, a mastectomy was one of the options we discussed previously before making the decision to do radiation and the lumpectomy. At the pre-op visit with the NEW breast surgeon, she explained all of the risks to me, went over what was discussed with my radiation oncologist and she really took the time to listen to me. She then explained to me that after radiation I’ll need to do a mammogram every 3 months for the first year. Then it would every six months the second year, providing they all came back normal. Then it would be once a year. At that point, I broke down crying uncontrollably. For the last five months I had gone from test to test waiting for results. Each time I felt like my life was “on hold”. The thought of having to play the waiting game every three months and then every six months was complete and utter torture for me. I couldn’t put myself or my family through that anymore. That’s when I said, “I can’t do this anymore. I don’t want to live with my life “on hold”. I want a mastectomy.” She then asked me whether I wanted a unilateral or bilateral. Take them both, I said. I want to be in control of my life again. The pathology results from the mastectomy came back confirming definite DCIS – Grade II in both quadrants in the right breast. So the decision to have the mastectomy was good. Now the surprising twist was that the left (which was elective) had Stage I – Invasive Ductal Carcinoma – Grade II. Had I not done the elective mastectomy on the left breast it would not have been discovered for a least another year or two on a mammogram because of where it was located. I truly believe that I had angels watching over me guiding me to make the right decision. The decision that ultimately saved me.