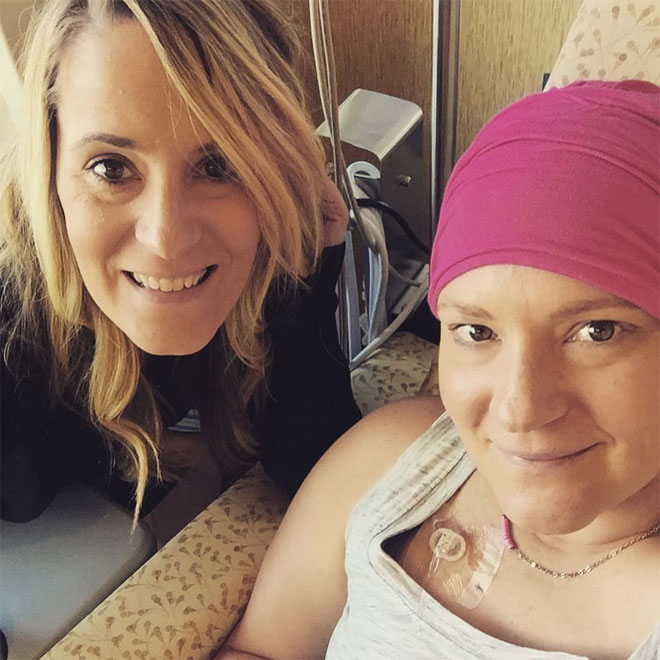 I come from a very close family of 6, my brother Brendt, my sister Kristen and my identical twin sister Sarah. We grew up in Minnesota, my parents still live there, but my sisters and I are all now living here in Denver. Everything anyone has ever told you about twins and their super close relationships is true. Sarah and I have been pretty much inseparable since birth although we did try to go our separate ways for college but that only lasted one year before we were attending the same school and living together with our girlfriends.

My twin sister Sarah, is a second grade teacher and mother of two girls, Sophie 6 and Nora 2.5. (Picture of Sarah and Family). In late November of 2015, when Nora, her youngest was just 5 months old, Sarah discovered a lump in her breast and scheduled herself a mammogram on Tuesday, December 15th. There was never much thought other than “I’m breast feeding, it must be a clogged milk duct”, but also, in the back of her mind, she knew our family history of breast cancer and wanted to be sure this wasn’t what she feared it could be.

After completing the mammogram they found two lumps in question and her lymph-nodes near her armpit were also abnormal. They immediately scheduled her for a biopsy the next morning. The results of the 3 biopsies were confirmed on Thursday, December 17, 2015 at age 33 my twin sister was diagnosed with stage 3 breast cancer.
Both lumps in her breast were diagnosed as invasive ductal carcinoma breaching the ductal wall and into the outer tissue. The sizes of the lumps were approximately 3.8 cm .6 cm and in the Axilla Lymph-node 1.8 cm. Of the 20 lymph nodes they removed 18 of them were positive for cancer.

I remember the day so clearly, I remember my sister Kristen calling me as Sarah didn’t have the strength or courage to call me herself knowing how hard I was going to take the dreaded news. I remember falling to the ground, numb, with tears streaming down my face. All I could keep thinking was, “why God? Why Sarah?” I was devastated, and angry but most of all I was really scared. I lost a lot of faith in God that day. I just couldn’t understand why he would pick my sister to have to go through something like this, she was so young and she had 2 little girls at home. When I saw Sarah for the first time after her diagnosis she said to me, “I know that I was the one to get cancer and not you because God knew that I would be strong enough to beat it”.

As soon as my sister received the diagnosis my parents jumped in their car and drove straight through to Colorado from Minnesota. We had plans as a family to spend Christmas together as we always do, all 18 of us, in Winter Park. This Christmas would be so different. We cried a lot, we laughed a lot, and tried to make the best out of our time together as a family before the long journey of fighting would begin.

In January of 2016 Sarah had her first surgery, a mastectomy (her left breast only). The doctors decided not to remove both breasts at the same time as they wanted Sarah to heal as fast as she could so they could start her chemotherapy treatments asap.
Despite the heavy diagnosis and the time Sarah spent in the hospital with her mastectomy surgery, the moment when it hit us just how real this was, was when chemotherapy began. Sarah would have to undergo 16 rounds of chemo which started in February 2016. During this time, Sarah was losing her hair and her physical strength and she was scared, as anybody would be. She was scared of the outcome, scared of the process and scared of the changes that were happening and would continue to happen to her body.
Here is a photo of me and Sarah on the night Sarah decided it was time to shave her head as she was nearing her second round of chemo and her hair was starting to slowly fall out.

During chemo, Sarah’s positive attitude never faltered, though she struggled with having to change her life from the normalcy of working and spending time with her girls to now dedicating everything to her healing and to her survival. She decided to take time off from work so she could focus 100% on fighting and spending time with her daughters, she stayed social whenever she felt up to it; she was convinced that a few margaritas here and there could only be killing more bad germs…plus it made her pain seem a little more bearable. Overall, Sarah felt hopeful. As for me, I just wished I could have done more for her throughout it all. She always assured me that she was fine. I knew she wasn’t fine; how could she be, when she was undergoing treatment that was leaving her nauseous, exhausted, weak and, even if she tried to hide it from me, scared? Though she was brave, there is only so much smiling you can do as you slowly lose your hair, your eyelashes and your appetite.

Even before her cancer diagnosis, my sister was a huge role model to me, but watching her undergo so much pain—both physically and emotionally—and seeing her smile even after shaving her gorgeous head of hair at such a young age, truly helped me to gain a more appreciative perspective on life. Just because we are young and privileged never means that we can take even one day for granted. The fear of losing a sister, a daughter or a best friend brought all of Sarah’s loved ones closer to her, and she was able to rekindle and strengthen friendships along the way. Continuously losing things and in return gaining others was an ongoing theme throughout Sarah’s 5 month chemotherapy process. She would lose her work and social life, but would gain the support of an entire community. She would lose her breasts, but in the end would eventually have her health back.

After Sarah completed the 16 rounds of chemotherapy she had to then get ready to tackle radiation which would be 5 days a week for 6 weeks for a total of 30 rounds. The radiation made Sarah extremely tired and by the end of the 6 weeks she had a terrible burn that was more painful than anything she has previously experienced. Radiation really took a toll on Sarah but she got through it and we threw a huge party on the last day of her radiation!

Sarah’s breast cancer was one of the most terrifying things that has ever happened to our family, but it was also one of the most beautiful things to see how much love and support she had along the way. Our cousin in MN created t-shirts that said “Hear ‘Rah Roar” as all of Sarah’s nieces and nephews have always called her Rah. People from all over the United States purchased these shirts in support of Sarah and would send pictures of themselves wearing it to show Sarah they were thinking of her!
As much anger and frustration I felt towards God in the beginning I slowly began to believe and have faith that He would take care of Sarah and get her through this. I prayed every day that Sarah would stay strong, that she would continue to fight and that she would overcome this. If there was ever a time I had any doubt, the power of prayer proved me wrong. I knew the prayers had worked and that Sarah was going to be a survivor.

Sarah then had a hysterectomy in November, a 2nd mastectomy surgery to remove her other breast and then her final, biggest surgery was reconstruction which was in August of this last year. This surgery was called a TRAM FLAP where they take the skin from your stomach and move it to your breasts all while reconnecting all the blood vessels etc, The micro surgeons who performed this surgery were so amazing and so talented. This surgery lasted 13 hours and required a 5 day stay in the hospital. All in all Sarah has had 4 major surgeries with another in March to correct some of the reconstruction.
So where does this leave me? Since Sarah and I are identical twins this means we share the same DNA which means I too carry the BRCA 2 and CHEK 2 gene mutation which requires me to go in for a mammogram/Breast MRI every 6 months which is super stressful. After a lot of deep conversations and many prayers I decided what was best for me and my young family would be to have a hysterectomy. Removing my ovaries would mean that I wouldn’t be producing as many hormones which would in turn lower my chances of developing cancer. I had the procedure done in May of 2017 when Corinna was 4 months old. Everything went well and the recovery was easy, but let me tell you, the hot flashes that come along with menopause are seriously NO joke.

The next step for me is to have a prophylactic bilateral mastectomy, a procedure that removes all breast tissue that could potentially develop into cancer, and is something most women who’ve found that they carry the BRCA 2 gene will choose to do in hopes of avoiding future disease. Right now my chances of developing breast cancer is 80% and after this surgery my chances drop down to 2%.
I met with my plastic surgeon and my breast surgeon this past week and am scheduled for my 1st surgery this coming Friday. The recovery will be tough and not being able to lift my baby girl for around 4 weeks is going to be really hard, but in the grand scheme of life, this short month is just a blip in time compared to having to go through what my sister went through.

This coming June Sarah will be 2 years cancer free. It’s so amazing to be able to say that out loud. She is a survivor and I am so proud of her.
Since Sarah’s experience with breast cancer, I know that I, as well as the women in our lives, have become much more aware of doing self-examinations as well as supporting those battling their own fights all over. My family has participated in various walk for the cure events. We continue to rock our “Hear “Rah Roar” bracelets and shirts and will continue to participate in any breast cancer events that can help people like Sarah win their fight. We are lucky to have our Sarah still with us today, and we can all look up to her as a hero.