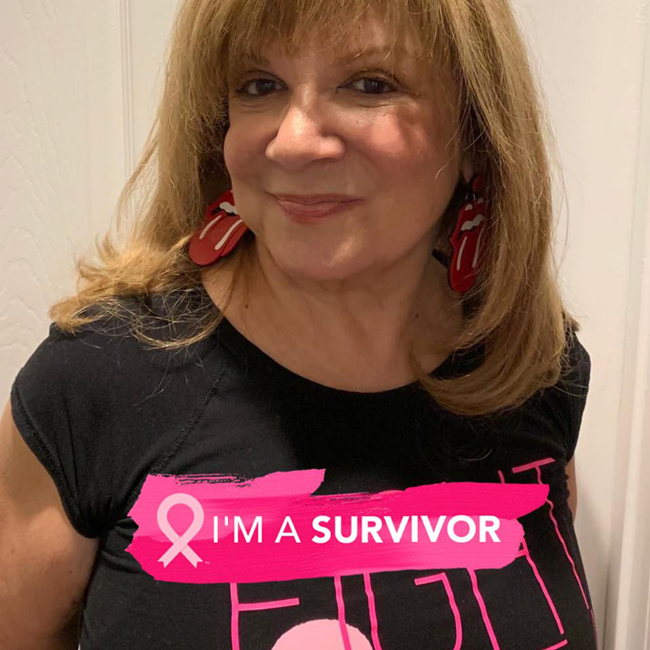 My body knew before my mind did. I’d wake up shivering, stomach roiling, tears streaming. I had no idea what was wrong. I remember looking out our bedroom window, the trees blooming, the sounds of an early summer wafting through the screen. There was no reason to feel anything but joy. I was teaching nine yoga classes a week, working with communication clients here in Maryland and around the country and giddily contemplating the 11th row tickets to see the Rolling Stones in Arizona later in the summer. I’d just had my yearly physical and all tests came back perfect. The only one left was a mammogram. I was confident all would be well. I’d breezed through a lumpectomy four years ago for DCIS. When I arrived at my radiology appointment, I took a selfie with a thumbs up so I didn’t have to waste time at the end. The technician did the mammogram, left the room, and asked if she could do a retake. After the second one she left again. The image was still there. I could see a bright white flash on the screen. She came back in and asked that I remain. They needed to do a sonogram. The doctor met with me after that and said I had to come back the next day for a core needle biopsy. I knew I would not be waking up peacefully again anytime soon. My family and I left for vacation the following day, with promises from the radiologist that I would be notified if anything was wrong. We went through the weekend and on Monday afternoon I saw my own doctor’s DC number on caller ID. I knew my life was irretrievably changed. “It’s cancer,” she said. “I wanted to be the one to call.” We met with the surgeon who did my DCIS procedure four years earlier. She was magnificent then and I knew she would be now. The tumor had to come out along with sentinel lymph nodes. She gave us a surgery date the following week. My husband told her I had a Stones ticket. She laughed and said I’d better see them while they were still on the road. We scheduled the procedure two days after the concert. Mick Jagger was back on tour after his heart surgery and, well, Keith Richards…. So I made plans to go. The concert was on Monday. I flew back Tuesday and was in surgery on Wednesday morning. They removed the malignancy and found more DCIS. The sentinel nodes were not affected, and margins were clear. The bad news is I was diagnosed with Triple Negative Cancer, which means the usual protocols would not work. I needed chemotherapy and I needed to start immediately. After that I would have radiation. And that brings me to my magic wands. I made my first magic wand out of a Popsicle stick and one of those sticky gold stars that teachers used to slap on the top of papers when you did a particularly excellent job. I don’t know if they still do that, but I do know that I still believe in the power of wands. Six years ago, I had a total knee replacement following a freak accident. I started handing out wands then. I probably gave them to 100 people. They must have worked because I became a yoga teacher not long after that. So, I went back to my wand supplier. If the wands worked then, they could work now. This time I went one better. I got shirts that were emblazoned with “Team Cheryl” and a drawing of a wand. Everyone who was part of the DC, Maryland Meal Train set up by friends received the shirt. I stepped it up with a hash tag, #wandsupforcheryl. I gave wands to my doctors at Sibley Hospital.