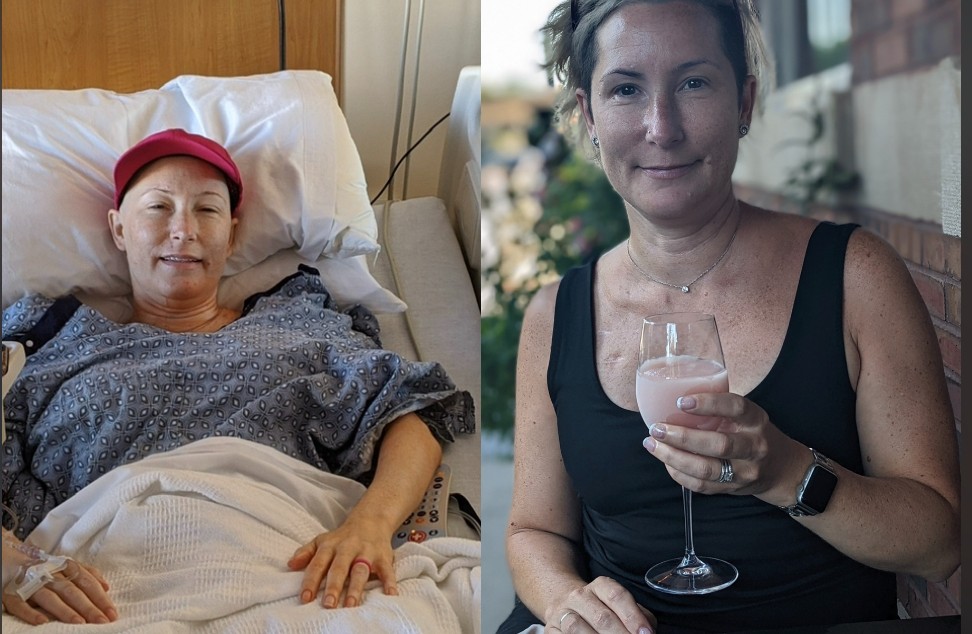 Journey turns in helping others

My name is Corina Klein and I’d like to share how my breast cancer journey turned into helping others.

On April 16, 2020, as the world was starting a battle against the COVID pandemic, I received news I would be starting a battle of my own. I had been diagnosed with Invasive Ductal Carcinoma (IDC) – triple positive breast cancer – and so my journey began.

A silver lining of the pandemic was the cancellation of all elective medical procedures. I was assigned a team of oncologists and surgeons and with unprecedented availability my treatment moved fast.

The plan was to have a chemo-port placed just weeks after my diagnosis and testing and 6 days later begin with 6 rounds of a combination chemotherapy called TCHP followed by 14 rounds of HP/Kadcyla which I completed on May 5th of the following year.

The decision was made to undergo a bilateral (double) mastectomy due to such a high risk of reoccurrencewith my specific diagnosis. I did, however, opt for a nipple-sparing surgery, hoping to maintain as much of my self-image as possible. This surgery, performed on September 11th, was not without its own risks and unfortunately due to skin necrosis I had to go under the knife a second time less than 3 weeks later to have my nipples removed as well.

In February of 2021, I had healed enough to begin the first part of breast reconstruction. The surgery went well but looking in the mirror I still felt incomplete. Three months after that surgery was the final phase of reconstruction for me when I chose to have 3D ‘nipples’ tattooed and complete the look I wanted. For my artist, I chose a woman named Tegan – a breast cancer survivor herself – at 5 Monkeys in Newmarket, NH.

The vision for Ink 4 Pink came after seeing a post on 5 Monkeys’ Facebook page ‘shouting out’ a person who donated to cover the cost of nipple tattoos for someone who couldn’t afford it. I didn’t know that medically this was considered cosmetic and generally not covered by insurance. I had a dream that night where I started a fund to help people with what is hopefully the end of their battle. The next day I did a little bit of research, spoke with a few close friends and Ink 4 Pink began to form with our mission:

We are on a mission to help breast cancer survivors who have undergone mastectomies or lumpectomies feel back at home in their bodies. The war against breast cancer has very serious physical and mental ramifications for patients and many breast cancer survivors struggle with the loss of self-identity and the feeling of incompleteness after a mastectomy. Every day survivors are confronted with the fact that their nipples are missing, replaced with large scars.
Restorative tattooing has greatly grown in popularity as a solution for some of the mental and physical trauma experienced by survivors. This simple, non-invasive procedure can restore confidence and provide a sense of completeness in many women and men. Unfortunately, most, if not all, insurance companies do not cover the expenses associated with restorative tattooing. Ink 4 Pink partners with breast cancer survivors to help regain their sense of self by subsidizing the cost of nipple and decorative breast tattooing, as well as scar camouflaging, for breast cancer survivors who cannot afford to pay out-of-pocket. We have also just started offering the option for women going through chemotherapy regimens where hair loss is a side effect to have their eyebrows tattooed on before treatment. We strongly believe that no one should have to forgo feeling confident and whole again after recovery because of their financial situation.

Our current footprint is from Portland, ME, through the Seacoast to Boston MA with hopes to expand into other states.