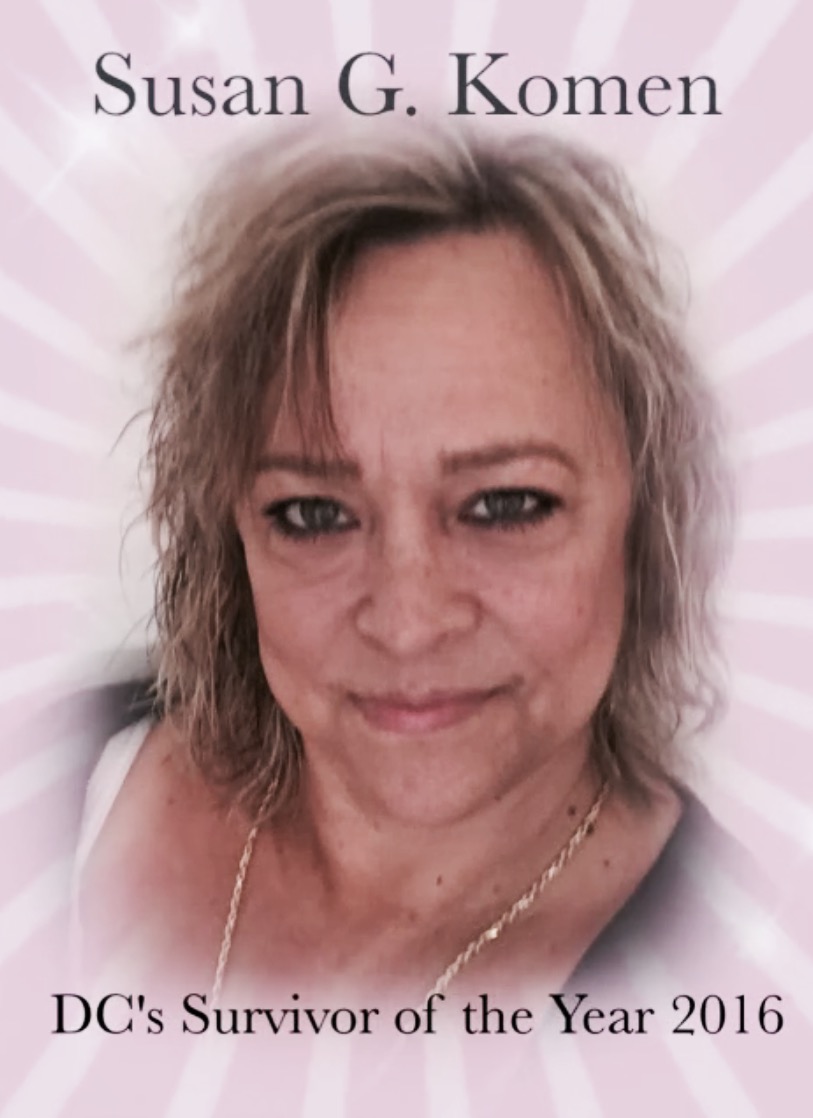 As an Army wife, I thought I had lived all of the Army mottos: “Be All You Can Be”, “Army of One”, “Army Strong”, but my personal battle would come, after my husband retired from his 28+ years of service and I would find out just how strong I was, being all that I could be. In December 2012, I was told that I was going to have the fight of my life (stage 3B-T4 invasive ductal carcinoma, HER +++) and the beast was BREAST CANCER. Pink would become my new favorite color (except during football season). There were going to be good days and there were going to be really bad days. 14 months of chemo, 38 daily radical radiation treatments, 3 surgeries and several hospital stays have now passed.

Yes ~ I am a SURVIVOR! On July 31st, 2013 I received the news all cancer patients want to hear: “You’re in remission”. My amazing medical team at Walter Reed National Military Medical Center, my family and my friends were a gift from God that I am truly thankful for. Three months into my chemotherapy, Angels & Warriors In Pink was created – a team of breast cancer survivors (Warriors) and those who loved us through the journey (Angels). Bake sales and car washes, pink survival bracelets, key chains, jewelry – were all made and sold to raise money for a cause that was near and dear to all of us.

In 2016, our fundraising also included several Painting for Pink parties and BUNKO’s for the CURE, with all of the events raising several hundreds of dollars each. Over the past few years, I have participated in several promotions recognizing Susan G Komen and bringing awareness to breast cancer. Some of these events include DC Race for the Cure, Komen’s Survivor Volunteer Network, Restaurants for the Race, NBCAM, Row for the Cure, Karaoke for the Cure, GMU’s Pink Game Day and various health fairs to support outreach programs throughout the DMV. The four year journey has been filled with fears, tears, joy, laughter and celebration.

In 2016, I would be honored by being named Susan G Komen’s 2016 Survivor of the Year for Washington DC. My survivor sisters were not only my friends but family. Breast cancer was in my life well before I was diagnosed. Traced back five generations, nearly all the women in my family have fought the battle and of the nine women diagnosed with breast cancer only two of us have survived three years post diagnosis. Genetic tests revealed that I do not carry any BRCA genes, however I continue with my genetics councilor as new breast cancer genes are discovered each year. When I am asked: “What is the one thing that got you through it”; my answer is – my faith and the faith of all who love me. They lifted me in prayer and I am thankful because He was listening. God is good! Now that I see my family and friends fight the battle, as well as my journey and knowing breast cancer is a possibility for one of my three daughters – I realize that being a breast cancer survivor is More Than Pink.