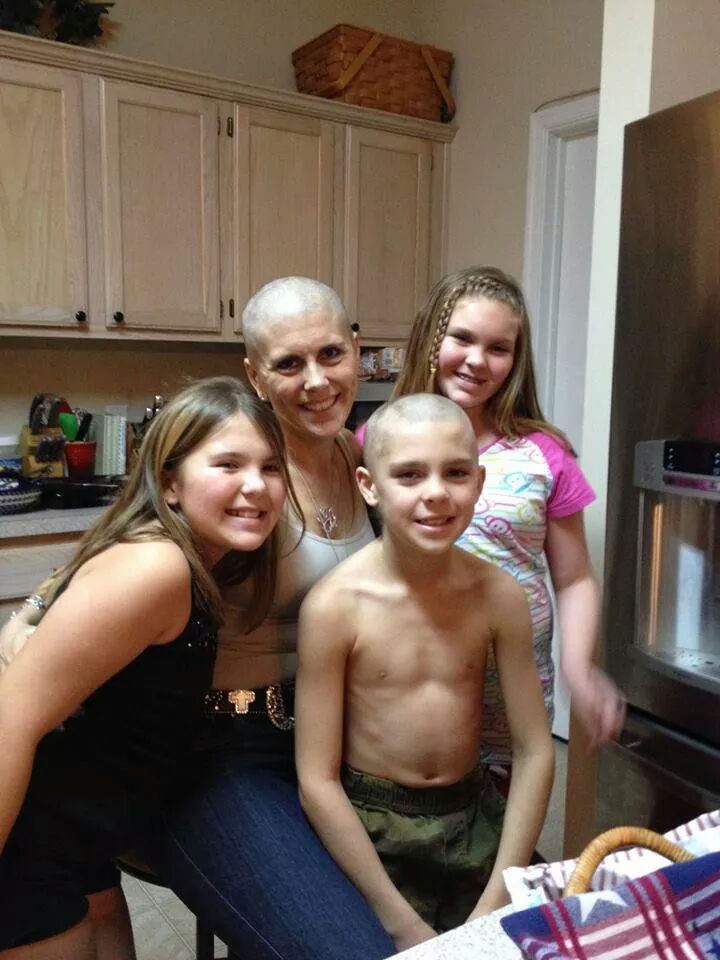 My mom had cervical cancer at 23 while pregnant with me and was told to abort me, have a Hysterectomy and start treatments. She refused, was monitored closely and waited until I was born to have her Hysterectomy. She recovered well and the years passed. I remember always being nervous about cancer because of my moms history. Many years later my dad fought 3 different cancers (thyroid, prostate and colon). After a 7 year battle, we lost him.

When that happened I knew, I just knew I was going to have cancer one day. I was proactive with my care, always listened to my body. When I found my lump in 2008 I panicked. I went to the Dr that day. She sent me for a mammogram and they did an ultrasound also. I was told I had dense breasts and they were fibrocystic..but I had nothing to worry about,this was just a cyst. About 2 years later I moved to Hawaii and had to have a Hysterectomy because of heavy bleeding. They tried everything NOT to do it, but, in the end it needed to be done. We decided since I was do young to leave my ovaries. 6 months later I went into surgical menopause. The mood swings and hot flashes were unbearable. I was put on a high dose estrogen Patch which worked great. Time moved on, I kept a close eye on my lumpy breasts. One day I found a lump, but I could not tell if it was new or old. I went to see a friend of mine who was a Breast specialist/general surgeon. She ordered another Mammogram and ultrasound. We decided for peace of mind, she wanted to biopsy it. I went in for the biopsy and the head of Radiology came in to see me. He said he truly did not see ANY reason to biopsy that lump. It was a typical fibroadenoma (he compared my films). BUT, he saw another one that looked suspicious and thought we should biopsy it. So we did, and it was totally normal. Yeah, great news..

About a year or so later, that lump that I had my friend check out…the one I was told was fine…well, it started itching like CRAZY. We were moving again, were military and I figured I would get settled in the new house and have it checked. The itching got so bad, and the pain was awful. I could not lay on my side. Off to a new Dr I went. I thought for sure he was going to say, its normal, let’s take it out so it will stop hurting. His reaction was much different. He said (you mean to tell me they told you this was NORMAL). I’ll never forget that. He got me a mammogram and ultrasound IMMEDIATELY. I found it odd that it was not an ultrasound tech doing it, it was the head of Radiology. I could see it in her face, although she tried to seem like she was not that concerned. We scheduled a biopsy for a few days later. She told me she would call me with my results. Nov.12, 2013 I was at work, and I kept having these little panic attacks. I KNEW she was going to call that day, and the news would not be good. Sure enough, my phone rang and she asked if I was in a safe place to get my results. I said yes, (I was all alone at work. No support, no family, noone to hold me up when I came crashing down). I am so sorry to tell you this, but the biopsy was positive..you have breast cancer. I don’t remember much else from that phone call. My DX was invasive ductal carcinoma. My heart broke. I knew I was going to get cancer, just NEVER thought BC. My kids faces were plastered in my head. I can’t die. I can’t leave my babies. I knew at that very moment I had to fight for my life.

3 weeks later I went in to start my journey. I had a double mastectomy, sentinel node biopsy (12 nodes were removed and 2 were positive), tissue expanders placed. I came home from the hospital on my 40th birthday, (happy birthday to me).. I had 8 rounds of Chemo, 25 radiation treatments, reconstruction. Currently. I am 2 years out, feeling pretty good and waiting to finish up my reconstruction. I kept a FB page to document my journey and received so much support. My mission was to get 1 person to have a mammogram, and not be scared of it. Turns out, LOTS of women went and had them. 1 friend of mine actually got the unfortunate DX of breast cancer, but she has done great and is on the road to recovery herself. I have become an advocate for this cause. I have become involved in some AMAZING organizations that give as support to women (and men) with cancer. Www.Beyond Boobs.org is the group where I live that helped me through this whole journey. Gloria Gemma Breast Cancer Resource Foundation in Rhode Island is my support back home (where I will be moving back to this summer). One more thing I went through during this process was realizing how short life is. I was not happy in my marriage, and had not been in some time. I decided then that it was time for a change. It was time to take control of my life and be in charge of my happiness. I am currently going through a divorce, but we have remained close friends. I look forward to moving with my kids and starting over. I felt my dad through every step of the way. I was with him through all of his treatments, and I was with him when he passed. I know he was my angel that kept me fighting.