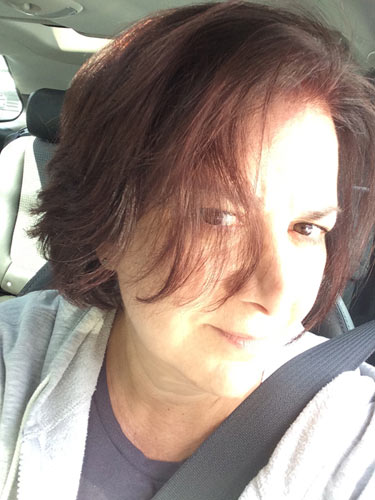 My initial pathology report, the one resulting from my first biopsy, hit me the hardest: “Site one…architectural distortion…poorly differentiated invasive ductal carcinoma…intermediate to high grade ductal carcinoma in situ. Site two…mid anterior cluster…Recommendation: breast MRI and surgical management.” All the pathology reports and post surgical findings that came later, were a little easier to digest. I think it was because I had already come to terms with the fact that I had cancer. It’s really that first confirmation, the first time a lab tech or a doctor looks at you a certain way… after that, it was easier.

I was diagnosed in December 2014 and in February I underwent a double mastectomy and DIEP reconstruction, along with sentinel node biopsies on both sides. I opted for the bigger surgery simply because I didn’t want to spend the rest of my life wondering if the cancer would come back. A lumpectomy or a single mastectomy just didn’t seem aggressive enough. I had already spent too many years coping with mammogram results that required biopsies and follow ups — I was positive that the double mastectomy was the right path for me. And while it’s only been a few months since my surgery, I have no regrets. Of course, I was terrified of the surgery. But I had wonderful doctors and despite the fact that I was in the operating room for 10+ hours, my recovery and “bounce back” time was better than I expected it to be. The hardest part of recovery has been shutting down the negative voice in my head that tells me I should be “back to normal” already. That, and the 6 post-surgical drains. The drains were really rough. I can’t lie about that. My doctors work with a wonderful physical therapist and lymphedema expert. I can’t imagine how much harder my recovery would be without her care and guidance.

At 8 weeks post surgery, I nearly had complete range of motion back in both my arms. PT is hard work, but I’m so grateful my doctors and my insurance company recognize the value of it. It’s made a huge difference for me. If I could offer encouragement to someone who has been newly diagnosed, I would say: Breast cancer definitely sucks, but treatment has come a long way and none of what I experienced was as bad or as hard as I expected it to be. I know I was lucky. One of the first things my breast surgeon said to me was, “I give a lot of credit to the radiologist who found this on your mammogram film. This cancer easily could have gone undetected for another year.” Lucky, in so many ways. I didn’t need chemo or radiation. I was able to have the Oncotype DX test, so my doctors knew without a doubt that chemo would not improve my survival odds. I do, however, have to take Tamoxifen for at least 5 years, but compared to chemo, I’m expecting the anti-hormone therapy to end up on the “not-as-bad-as-I-expected” list. The truth is, I had cancer, but it wasn’t at all what I expected it to be. I know how fortunate I was, how treatable my cancer was, but that’s only because of how far cancer therapy has come. I’m so thankful that we no longer live in the age of one-size-fits-all treatments. All the more reason to listen to you body, get your diagnostic screenings and talk to your doctors. There’s just so much hope. So much to be grateful for. And so much that our shared experiences have to offer.