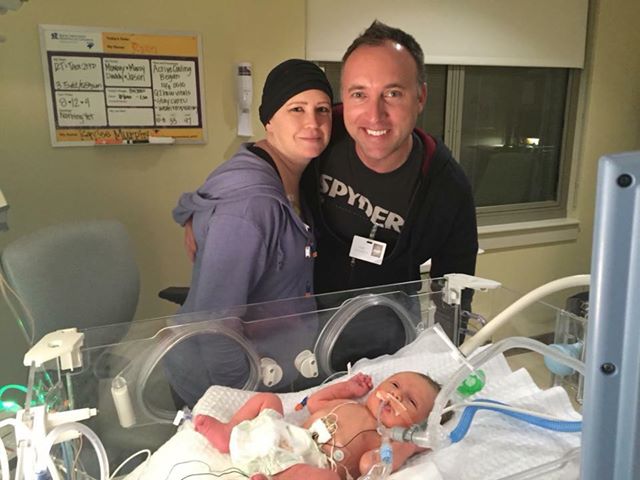 “I was diagnosed with I was 4 months pregnant. I had just had a physical exam by a doctor and she didn’t find my lump. I found it three weeks later while doing a routine breast exam. I had an appointment with my OB the following week and had her exam it (normally I would have held off getting into the doctor for months). She thought it probably had something to do with my pregnancy, but advised me to go in and get an ultrasound.

Went in right away for the ultrasound, they immediately sent me in for a mammogram. The radiologist suggested that I wait until after I deliver to have it followed up on. I decided against that and immediately went it for a biopsy. Two days later I was diagnosed with breast cancer and two days after that I was diagnosed with one of the most aggressive forms of triple negative breast cancer.

At five months pregnant I had a lumpectomy and then a six months pregnant started chemo. Completed four rounds of chemo while pregnant and then six more after I gave birth. I was also diagnosed with gestational diabetes and preeclampsia. Had to deliver a month early (I was completely bald).

Unfortunately I had complications during delivery and had to do an emergency C-section. My daughter, Kaylee, didn’t breathe for the first 22 minutes of her life (they call the resuscitation effort at 20 minutes, but her doctor was running late). She was immediately airlifted to another hospital and her body cooled for four days to stop the brain damage. We were told she would never walk and talk and if she did she would be considered a miracle.

I had complications from my delivery and had to get three blood transfusions (so I could start chemo again in two weeks) and had a blood clot on my port so it had to be removed.

Four years later Kaylee and I are both doing amazing. I’m considered in remission and Kaylee is a fully functioning three year old. I tell my story often for three reasons. a) Encourage people to be their own health advocate. If something doesn’t feel right, get in immediately and follow up. DO SELF EXAMS. b) Breast cancer is very treatable and can happen to anyone at anytime despite family history or genetics (I didn’t have either) b)  Miracles happen everyday and statistics are just that. Stay hopeful, stay positive and believe.”