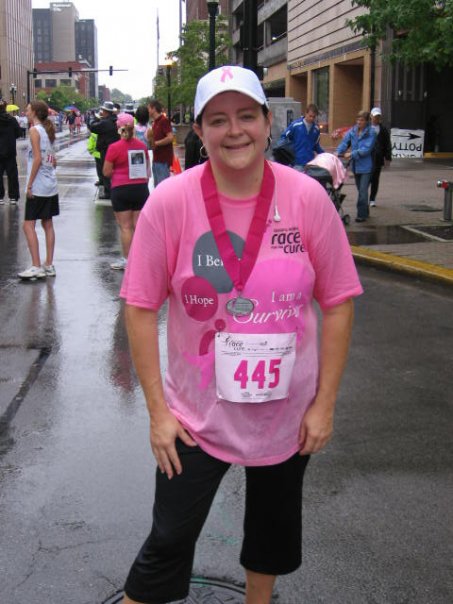 Twelve years ago at the age of 38, I felt a lump in by breast and knew it had grown since the month before. I immediately called my doctor and ended up having my first mammogram. The lump didn’t show up!! After ultrasounds and a biopsy it was determined I had breast cancer. The tumor was 1.9 centimeters, grade 3 and triple negative. Protocol back then dictated and immediate lumpectomy, followed by chemotherapy and then radiation. Fortunately, I had no lymph node involvement. Triple negative was rather unheard of back then. I was also BRCA negative, so I was a very rare case in my small city. I did well throughout all my treatments. I had all of my followups etc. Around five years cancer free I decided I was tired of all the worry about every little thing on a mammogram or MRI. I decided to have a double mastectomy with reconstruction. My doctors were very supportive and we moved ahead doing the mastectomy first to make sure my radiated skin would not die. I had a few small issues along the way, but when I went in for my final reconstruction on April 1, 2014 I had a horrible joke played on me- my cancer was back in a 4mm tumor on my skin! My plastic surgeon discovered it, thank goodness! It was deemed a reoccurence. Fortunately, no other metastasis were found. But due to the nature of the triple negative cancer, I had to have 12 round of chemo AGAIN. In the years between my two chemos, things had come a long way. It wasn’t fun, but I handled things much better! Now, 12 and 6 years later I can say I am cancer free! I have many requests from friends to help their friends when diagnosed. I enjoy talking with women and being a comfort. I have helped so many women with a breast cancer diagnosis. It is almost overwhelming to think about how many women are getting this disease! We need to keep fighting!