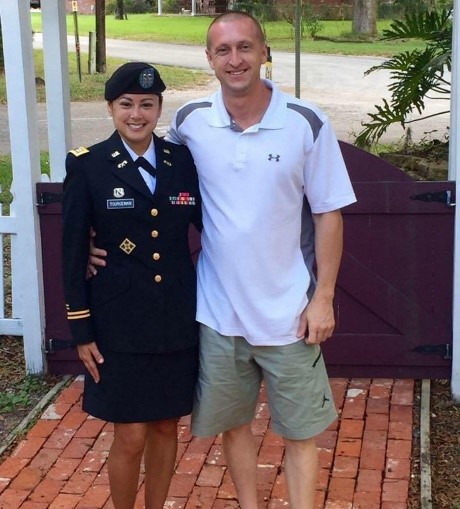 A person’s destiny is everything that happens to them during their life, including what will happen in the future, especially when it is considered to be controlled by someone or something else. Our destiny was unified on a cruise and it has developed into our scheduled wedding in November 2018. As we all know, every story has a challenge and we experienced the most challenging event of our lives in March 2017. Naara was diagnosed with stage IIB breast cancer and we were all shocked. Naara was so young to be diagnosed, considering she is very active and is a US Army Veteran with multiple combat tours. Nothing could prepare Naara for what was ahead after being diagnosed. She made mention, that this was worse than any “bad day” in Iraq. From March 2017 to October 2017, the bond between us grew and we never left each other’s side. Naara was strong and positive during her double Mastectomy and multiple surgeries, we knew that conquering and beating cancer was a combined effort. We are proud to announce that Naara’s surgery was negative from the lymph nodes and no other cancer has been detected in tests and surgeries which resulted with no CHEMO needed. To celebrate this glorious event, we were engaged on October 31. As we continue our journey towards our marriage in 2018, we wanted to inform you that Naara’s only wish for a bridal shower is donate 100% gifts to Susan G. Komen. The theme for her bridal shower is a “Pink Party.” We believe this is worth more than any gift Naara can receive at her bridal shower.