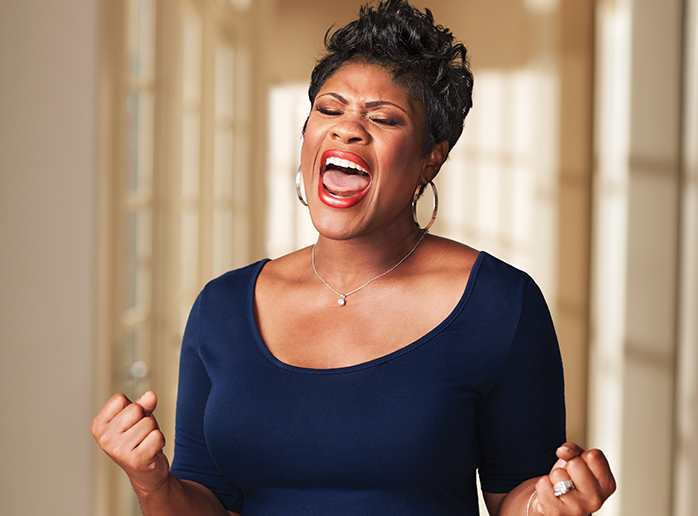 When Nikia Hammonds-Blakely was first diagnosed, breast cancer awareness and treatment options were far from where they are today. It was 1994, she was 16 years old and felt powerless in her situation. But that didn’t keep her quiet for long. This is the story of an incredible young woman who found her voice in the midst of a life-long journey with breast cancer. This is Nikia’s story, in her own powerful words.

On her not-so-sweet sixteen

I first discovered I had breast cancer when in the shower one morning – getting ready for school – I felt a lump, and it was concerning enough that I decided to talk to my mom. We went to get it checked out and the doctor said, “Don’t worry about it. I’m sure it’s nothing. You’re a teenager, and girls your age are just developing.”

“Not only did it turn out to be breast cancer, it was a rare and very aggressive form of breast cancer and I was just 16 years old.”

When you think about what the average teenager’s life is like during that time, usually they should just be worried about going to the prom or what boy they’re crushing on. So for somebody to tell me that now the next few years of my life would be spent battling breast cancer? I have no words to express the fears and the feelings of the unknown that were ahead of me. I felt that no one understood what I was going through, so I internalized my pain.

The only therapy that I had was music. I began writing songs.

On her partial mastectomy

I had a very limited access to quality healthcare and treatment. I was seen by a general surgeon and quite frankly the incisions were pretty botched. I wasn’t told about reconstructive options or prosthetics, so everything I did, I had to figure out on my own.

For example, I had a partial removal of the left breast, which left one the size of a grapefruit and the other the size of a cantaloupe. I used balled up gym socks to try to even it out, and I didn’t always get that symmetry quite right. There were times I was even called out for stuffing my bra.

On reclaiming her life and finding her voice

Facing my mortality made me realize that not only did I want to live, but I also wanted to make the most out of my life. A year out from my diagnosis I found a new confidence, started making straight A’s, began auditioning for school plays, got on the speech team, was elected vice president and graduated at the top of my class. And every year, like clockwork, I got my regular mammogram. Breast cancer awareness was a new part of my normal.

Through my 20s and college, I became an advocate on my college campus, encouraging other young women to learn the signs of breast cancer. Shortly after, I learned Susan G. Komen wanted to hear from sectors of the communities that may have been untapped or underserved in the areas of breast cancer treatment and access. So I was voted in as part of the Young Women’s National Advisory Council, where I got to lend my voice to the organization.

Later, Komen introduced me to the concept of lobby day, where we got to go to Capitol Hill, sit down with legislators, and have a voice in the latest healthcare bills that would affect coverage for people under 40. That was so empowering to have a say — to sit at the table and tell them, “Hey, I’m a living witness. We need our voice to be heard.”

On discovering she had breast cancer, again

Life was on one of those high moments. I’m married, doing well, feeling good in my own skin, until one day I went for my annual mammogram. By this time I was 18 years out from my first experience when the doctor says, “You know, Nikia, I see some suspicious activity. Maybe we should check it out. Then again, maybe it’s nothing.” When I heard him say those words, it was like a flashback to when I was 16.

Sure enough, it was very early onset breast cancer.

The only saving grace was that being so proactive, I was able to catch it early on. And this time I was in the driver’s seat. I was able to dictate my course of treatment. I was able to say what I wanted and how I wanted it. So I chose to finally surrender to the double mastectomy.

At 16, I didn’t know what life with breast cancer would look like. I was fearful. I was alone and afraid.  But through the process, I found my strength, I found my voice, and I’ve seized every opportunity to share it with other people. It’s not just the sunshine, but it’s the rain that grows us and deepens our resolve, and I hope that if people can see a little girl like me – with really no resources and accolades – make something out of what should have been a very mediocre life, you can too.

What would you say to a co‑survivor who is trying to figure out how to help a loved one?

Don’t underestimate the power of your love and support. There is often nothing more reassuring than hearing, “I’m here with you. I’m going to be here for you.”