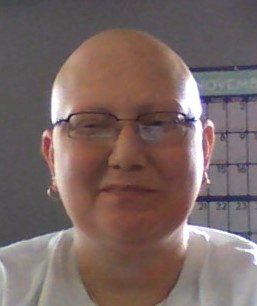 “I can do all things through Christ which strengtheneth me.” Phillipians 4:13 KJV These are the words I live by every day. In September 2008, I was diagnosed with stage IV breast cancer. I was 27 years old and not expecting such devastating news. My husband and I had been married for 7 years. We had two little boys: Marcus, who was 5 years old, and Cole, who was 2. We were so excited because Marcus had just started school in August, and our attention was on getting him ready for that. Cole was in daycare, and he was always happy when I picked him up at the end of the day. That day in September forever changed our lives. Not only did we have two little ones to worry about, but now, suddenly, we also had doctor appointments to work around and worry about. It was hard enough for me to go through this difficult time personally, but it was especially hard for me to watch my five year old deal with it as well. I have told my boys from day one that God has a plan for us, and it will all be okay.

Also in September, I found out about the upcoming Race for the Cure that was scheduled to be held in October. I was so excited because I was planning to attend for the first time. In the meantime, my doctor decided that I needed to start chemotherapy as soon as possible. He scheduled my first treatment for early October, which happened to fall on the day before the Race for the Cure. With this being my first treatment, I had no idea what to expect or how I would feel afterward. A group of friends and family had gotten together and were planning to walk in my honor, even if I was unable to go myself. As it turned out, I was able to go, but I did not feel well enough to actually walk. So I stood on the sidelines and cheered as thousands of people went by. This was a very moving experience for me, seeing all those people walking or running in memory of people they had lost, in honor of someone who was fighting, or in many cases, survivors who were still fighting themselves. I will never forget that day.

In just two short weeks, it was time for my second chemo treatment. The chemo schedule I was on consisted of treatments every two weeks, and after the third treatment, I would undergo a PET scan to see how well the chemo was working. After the second treatment, my hair began falling out. I went to work one morning and noticed it was slowly coming out. By the end of the day, I could pull full curls out, just like someone had cut it off. My boys thought this was the coolest thing ever! They even asked if they could pull pieces out. I let them, because I knew I was going to have to shave it later that night anyway. And that is exactly what I did when I got home. I went over it with clippers and then shaved it with shaving cream and a razor to make it smooth. This was definitely a shock when I looked in the mirror the first time. The following day, I went and showed my family and friends. My appearance without my hair caused the reality of the situation to truly sink in, and they all cried.

Much to my surprise, after just 5 treatments, my doctor decided the cancer had shrunk enough to do surgery. He was not able to do it before because it was attached to my chest wall, and he did not want to remove part of my chest wall. So in February of 2009, I underwent a double mastectomy. My doctor felt it was better for me to do a double mastectomy because I was so young, and it would reduce my chances of recurrence. It was really hard for me to look at myself in the mirror after that life-changing surgery. I had to make myself realize that I needed to be happy with myself, no matter what I had been through. God had gotten me through this, and I needed to remember that. It was difficult for me to go out in public because people would stop and stare at me and whisper. I understood kids doing that; they didn’t really bother me. It was the adults that were hard to overlook. At that time, I was still trying to work full time and take care of my kids, while dealing with everything else. The main thing that kept me going was that I knew my boys loved me no matter what I looked like.

I had spoken with my doctor, and he wanted me to have a hysterectomy because my cancer was estrogen receptor positive (ER+). As you can imagine, I quickly went from feeling like a 28 year old to feeling like a woman who had gone through menopause. My energy level became nonexistent, and it was very difficult for my two young boys to understand why mom didn’t feel like going and doing things anymore. After the cancer was declared “in remission,” I had to undergo 25 rounds of radiation treatments. This only made my energy levels decline more. When the treatments ended, I had 3 rd degree burns on my chest. Thankfully, I was unable to feel them due to the surgery I had previously undergone. In 2010, my scan results came back clean, so I was able to take a break from treatments. My life was finally getting back to normal, or at least as normal as could be expected. That normalcy was short-lived.

In 2011, a soft, fluid-filled knot came up on the back of my head. I went to the doctor to have it checked out and biopsied. When the results came back, I was once again diagnosed with stage IV breast cancer. It was in my skull and had eaten a hole completely through it. Fortunately, the cancer was not touching my brain. It was just hovering over it. So once again, I took chemo treatments and had to have one heavy dose of radiation. In 2012, an MRI revealed that the hole in my skull had grown due to radiation necrosis. The doctor wanted to do a cranioplasty, which is where a piece of titanium mesh is placed over the hole to stop it from becoming any larger. After that, I was able to take another break from treatments as the cancer had once again gone into remission. As a precaution, I was being scanned every 3 months in case the cancer happened to come back.

In 2013, a scan revealed that I had cancer for the 3rd time. This time, there were 5 spots. Three were in my neck, one by my heart, and one by my esophagus. The locations made radiation too risky, so I began taking chemotherapy once more. During my 3rd treatment, I had an allergic reaction to the chemo. I continued to take treatments for a year, which spilled over into 2014. Another scan confirmed that the cancer had spread to my bronchial tubes. After more biopsies, I was diagnosed with stage IV breast cancer again. I was emotionally and physically devastated, and I didn’t know how my family would handle it. I started back on chemo every 3 weeks and after the 3rd treatment, I had another allergic reaction. Chemo would cause me to have one bad week, followed by two good weeks, and then it was time to have another treatment. In 2015, I was having a scan done after every 3rd chemo treatment, just like before. I would continue this routine until a scan came back clean. After what felt like a lifetime of chemo treatments, I finally had a clean scan in November of 2015, just in time for the holidays! This was a very special time for me. It was the first time in a while that I had not been taking treatments during the holidays.

In February 2016, I went in for another scan. When I received the results, I was once again disappointed. My cancer had come back for the 5th time, and it was in full force. Not only was it back in every area it had previously been, but there were also new spots on my liver. Since I had already received so much chemotherapy in the past, my doctor wanted to give my body a break. He decided to give me shots and meds by mouth instead. I was scheduled for a CT scan regarding a different matter, and it revealed that my cancer was growing, rather than shrinking. So the only option was to go back on chemo, as this was the only treatment that had proven to work in the past. Currently, I am taking chemo every 3 weeks, and after every third treatment, I receive a PET scan.

My boys are now 13 and 10, and I have tried to teach them several things throughout this journey. First of all, life is what you make it. You can stop and lie down and let the bad things take over, or you can stand up and fight. It is very important to not let the cancer get you down and cause you to give up. I believe that you need to be thankful for what God has given you, no matter how bad life may seem. Just thank Him for letting you have another day. He does not promise us tomorrow, but He has given us today, so make the best of it. I am thankful I have had my boys with me throughout this journey because it has helped them to be aware that not everyone has an easy life, and also, they need to be happy with what they have. And most importantly, “I can do all things through Christ which strengtheneth me.” Phillipians 4:13 KJV