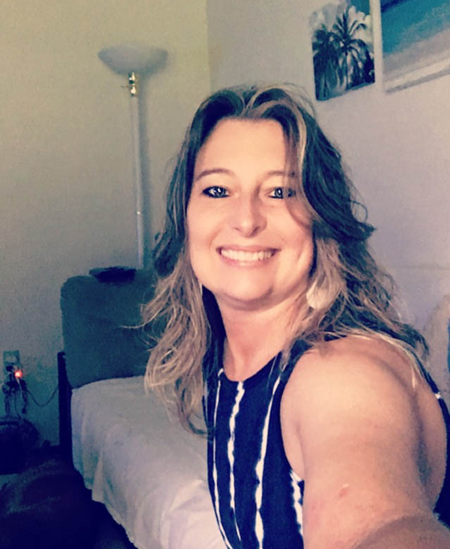 Our story begins back in June of 2017 when my husband was told that he had stage 4 Glioblastoma brain cancer. The news was devastating but despite the terminal diagnosis, my husband, Mike, refused to go down without a fight. This is one time when he being stubborn is a good thing. He was told that he probably won’t be here for our son’s high school graduation. For 6 months we lived one day at a time–not taking any of them for granted. They weren’t easy days as anyone being treated for cancer can attest but some friends did the most heartwarming thing for him and put together a benefit. There were hundreds of people: Friends, family, and coworkers. It meant so much to him that afterward, it was one of the only times I have ever seen him cry.

In January of 2018, I went for my annual mammogram. I was called back for a 3D mammogram then sent for biopsy surgery of my left breast. When the results were in, I was called back to the office where I was asked to sit at a table where 4 specialists were sitting, and I was told the worst three words: “You have cancer.” I was numb and I heard nothing after those words. This can’t be happening I thought, we have a son; we can’t leave him. I cried myself to sleep that night but woke up the next morning knowing that I had to be strong, not only for my son but for my husband. Since my aunt had passed in 2017 from breast cancer and had the BRCA2 gene, they wanted to test me as well. The test revealed that I also have the gene, so a double mastectomy was scheduled. The year was then full of ups and downs. The mastectomy revealed cancer in my right breast which was never caught in mammography. My breast surgeon told me she saved my life.

After my mastectomy, I got MRSA and was back in the hospital. One of the IV meds elevated my CK levels to the point that I lost muscle and movement on my right side. For 3 months I was treated and was very fortunate that it subsided without requiring additional surgery. Because of the BRCA2, I was scheduled for a hysterectomy and had surgery. During this time, I’m having expansions at the plastic surgeon’s office as part of the breast reconstruction. It’s now October and I’m back in the hospital having another surgery as my right breast expander ruptured. Then it was back to the expanding. Finally, the last week in December was my reconstructive surgery from expanders to implants.

While all of this was going on, my son was taking care of not only me, but my husband as well. There was a higher power at work here though because my husband had to go off chemo as it was destroying his liver, so he was not being treated. The doctors are still dumbfounded by that: We were told that no one with Glioblastoma can go untreated for that long. Soon after my December surgery, the tumor in Mike’s brain began spreading. His second brain surgery was in April of this year. His mobility is very bad but that stubborn man did make it to our son’s high school graduation in June. He is still fighting with everything he has. This has been the hardest 27 months of my life, but I know I am a lot stronger person because of it. Life is so fragile, don’t forget to live, laugh, and love.