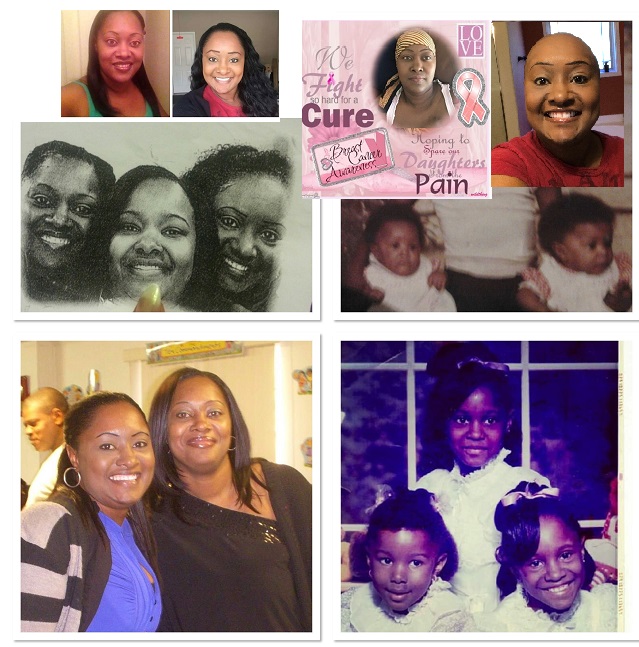 In February of 2016 my identical twin sister Stacy told me that she had to do a breast biopsy and that it was taking a while to comeback. It was only suppose to take like 14 days to comeback and we were on day 15 and she hadn’t heard back yet. Finally she was called and informed that she had to have a follow-up appointment. She went to the doctor and she was told she had breast cancer. When she told me she was diagnose with breast cancer, I felt so… scared. This is my identical twin sister who is only nine minutes older than me. We did almost everything together. We grew up together, went into the US Army together, had our first and last children together and now my better half was diagnosed with breast cancer. Because we did have other family members that had different types of cancer, Stacy had been having mammograms since she was 35. She was now 38 and was told she has breast cancer. At the time Stacy was in Tennessee and I was in Georgia, but I knew I had to be there for her as much as I could. So I took some leave from my job and went to Tennessee to help as much as I could, in the time that I had to be there.

While Stacy was going through treatment, her doctors advised that I be closely watched since we are identical twins, but me getting cancer was the furthest thing from my mind. I was only concerned that Stacy beats this. We have lost so many family members from cancer and I couldn’t lose her. But I did what they said a month later I had my first mammogram and everything was good. A few months later, Stacy was still going through Chemo, but I was back home with my family. Five months after my mammogram I was in the shower and my breast looked and felt funny and my husband always asked about the discharge that comes from my nipples when we were intimate. I felt something wasn’t right, so my GYN referred me to a specialist. I got checked and I was told everything is fine, but to make sure to continue to get my six month checks. I had a breast MRI coming up, so the doctor said she’ll followup with me after that. November 16, 2016, I had my first breast MRI on my 39th birthday. Thanksgiving came and I had a blast with the family. Then right after Thanksgiving I got a call and a letter to call to followup with the hospital for a mammogram and ultrasound. So I did! I did my followup, they found a lump and then I had to do a biopsy. I did a biopsy and it confirmed that I had breast cancer. It started in my nipples so that could be why I didn’t feel the lump and it was invasive.

Nine months after my identical twin sister was diagnosed, I was diagnosed with breast cancer. When I found out Stacy had breast cancer, I thought that was the worse day in my life. But to hear that I myself had breast cancer as well was even worse. Now while she’s still going through treatment I have to go through treatment. I was suppose to be there for her and now we have to get through this together both as patients. Well Stacy and I now are both survivors! We did it! With the help of our spouse, kids, mother, sister, dad, all our family, friends, and coworkers…We did it! We’re survivors!