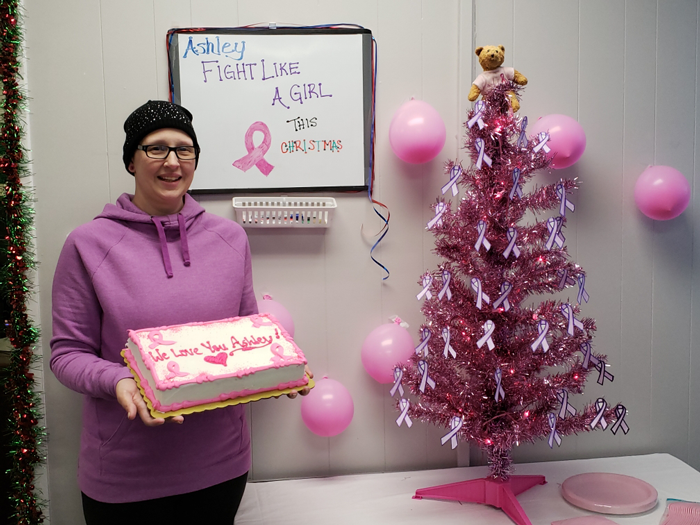 May 18th has always been my mother’s birthday, but in 2018, May 18th became a very sad day for our family. We were told that I had breast cancer at the age of 32. I was married and had 4 kids to raise and breast cancer did not fit into our plan. I went in to have a lump removed after being told that my percent of cancer was 5% because the doctor couldn’t say 0%. My surgeon had removed a total of 3 tumors, 2 of which did not show up on the ultrasound or mammogram I had the week before. I was told the news after waking up in the recovery room. Within a few days I was back seeing the doctor, she ordered an ultrasound of my lymph nodes and biopsy if needed. She also told us that we were looking at chemo and more surgery. I then found out that I had one positive lymph node, which changed things even more. I was also sent for genetic testing and was given an oncologist to begin my cancer journey. I was so afraid to tell my children, so we waited until they were out of school for the summer and sat them down and told them. My oldest, Micah, who was 13 was very upset in the beginning but once I explained that after chemo and surgery the cancer was gone, he was fine, along with Hannah, my 9-year-old. Isaac, my 8-year-old step-son, didn’t really say much and my 3-year-old, Lincoln, had no idea what was going on.

On June 8th I had my 2nd surgery to have my port placed, and my chemo started June 13th. When I was told about the chemo the only thing my husband asked was if I was going to lose my hair, and when the doctor said yes, I just broke down. I had been growing my hair out since my daughter was born, and she was 9 at the time. After thinking about it, I decided if I wasn’t going to be able to have my hair, I was going to donate it. I found an organization called Wig for Kids and on June 12th I went to Great Clips and had 14 inches cut off. I was so worried about how my kids were going to react, especially my 3-year-old Lincoln, but they all loved it. My chemo plan was 4 round of A/C and 12 rounds of Taxol. Around the end of June, after my 2nd A/C treatment, my hair started to fall out in handfuls, June 30th after my husband got off work, I had him shave my head. Cutting my hair and shaving my head wasn’t as bad as I thought it was going to be. When I woke up in the morning Lincoln looked at me rubbed my head and kissed it, it made me knew that no matter what he was going to love me, with or without hair. On Sunday, July 1st, when Hannah came home and saw my hair was gone, she cried. It was so hard to see her so upset but I just kept telling her it would grow back, and about a month later it did! My last A/C treatment ended on July 25th on my 33rd birthday. Birthdays as you get older don’t mean as much but cancer sucks and having to deal with it head on, on your birthday makes it all the more real.

I was then on to Taxol, which seemed to be much easier than A/C. When I was on A/C my treatments were on Wednesday every other week. By Friday I was to start my nausea meds and was stuck in bed from Friday to Sunday my body ached, I was tired and nauseous, even with meds I was miserable. Taxol was once a week and I went on Friday, I would have some bone pain a couple days after but nothing that I couldn’t handle. I did have to skip 1 Taxol due to low counts, and then my kids got sick and despite trying my best to stay away from them I ended up with a fever of 100.2 which hospitalized me for 2 days on antibiotics. I was sent home on 2 more antibiotics, making me miss another treatment. It was time to sit down with my oncologist and decide on a new treatment plan that consisted of 2 more doses of dense Taxol’s. I would have 1 big treatment that was about 3 hours, instead of the normal 1 hour, then wait 2 weeks and go back.

October 26th was my final chemo and it felt good to have one part of my journey behind me. Next step was the surgery. We knew I would need a mastectomy and removal of a lymph node on my left side (my cancer side). After some thinking and discussing with my husband and other family members we decided on a double masectomy, I’m only doing this once and I want to do as much as I can to make sure it’s not coming back. I had to meet with a plastic surgeon to talk about reconstruction, I decided to go with implants which would mean the doctor would place expanders and over time fill them to the size I wanted and then switch out to the implants. Due to me being otherwise health, the doctor decided to place my expanders at the time of my mastectomy, we still didn’t know about radiation but there was a 50/50 chance I could get an infection while on radiation with an expander. My surgery was scheduled for December 10th 2018,  the surgery went well and what little was left of my cancer was removed. My surgeon removed 7 lymph nodes only 1 having cancer, which we already knew about.

I was well enough to enjoy Christmas with my children and, thanks to the “I Have Wings” foundation, my children had a great Christmas – something I had been worried about since my diagnosis in May. My plastic surgeon was able to get 200 ccs of air into my expander at the time of surgery which was amazing, most women are only about to get 20-30 ccs of air I had skin sparing, so they took my nipple and about 2inches on either side, so I had skin so that I didn’t have to stretch very much at surgery time. December 28th, I became drain free which was a freeing feeling. I have had 1 fill so far, I should have 2-3 then I’ll be ready for my implant surgery. I always looked at each step as a goal to make it easier to get through it one step at a time. I still have a long road ahead with 2 more surgeries, 1 to remove my port and one to place my implants. Then I will be on Tamoxifen for 5-10 years. My journey will never truly be over, but it will get easier. and I can finally say I’m cancer free after a long 7 months.

As I said earlier my journey will never be over on January 8th, I went to a follow up with my breast surgeon who noticed the start of an infection, she put me on Bactrim and called my plastic surgeon who saw me Wednesday night. He put me on Cipro and between the 2 antibiotics everything was covered, he also drained some fluid to send off to see exactly what the infection is. From Wednesday afternoon to Friday morning the swelling had gone down and the antibiotics were working. We didn’t have the results yet so we weren’t too certain the infection was gone but we knew I was able to stop one of the antibiotics.  Once we got the results back it was both good and annoying; good that it was so small we didn’t know what it was but annoying because that meant I had to be on both antibiotics for another week. On January 23rd I went back to my plastic surgeon who was able to begin my fills but is keeping me on antibiotics for another week to get rid of the last bit of infection.

While dealing with my infection I met with my radiation oncologist who strongly advised for me to do radiation. I was very upset, logically I knew radiation was the best and radiation its self didn’t bother me, I was terrified of getting another infection bad enough that my expander had to come out. That would mean 4-6 months without a breast (real or not) and then a surgery that would involve taking skin from my back to use because the skin that they had to radiate wouldn’t be able to stretch. It was more of an emotional reason for me, I’m so scared of only having one breast, but I have to look at the bigger picture, I have a husband and kids that I’m not ready to leave anytime soon, and the radiation will give me one more thing to use against the cancer.  I went back to see my plastic surgeon on January 30th, I had another spot he was worried about, so he put me on 2 more antibiotic and kept me on the one I was already on. He said if it doesn’t get better, he will have to go in, remove the expander, clean up the inside with antibiotics and place another expander. We can’t start radiation until the infection is all cleared up, fingers crossed these meds kick it once and for all. I ended up having surgery on February 12 to remove my expander and clean everything up, once the Dr got inside, he could tell some skin was dead, so he cut the bad skin out, and put a new expander in. After a couple weeks from healing, we started to expand my left side again.

After a few weeks we started radiation on 4/15 and on 4/24 I got to ring the bell! It felt great to finally be done with treatment. Everything went great!! I was so worried the whole time because I have had so many issues in the past, my skin did turn very red like a sunburn and about a week later my skin was browner and had started to peel. I’m very grateful for all my doctors, my friends and my family. We were blessed to receive a vacation from the Karen Wellington Foundation, we will be going to Hilton Head June 22-29. My husband was at all my chemo’s and doctor appointments, held me when I cried, and did everything he could do to try and make things easier. My mother help take care of the kids while I went to every chemo and doctor appt., and my in-laws helped with food and bills. I was able to find a few organizations that helped with rent and gift cards. I also had a meal train set up to help with food while I was in chemo, so many people helped in ways I couldn’t even imagine during my treatment and I’m very grateful to each and every one. Just know it gets better and ask for help. I know it was hard for me to ask but you need all the help that you can get when you’re on the cancer journey.