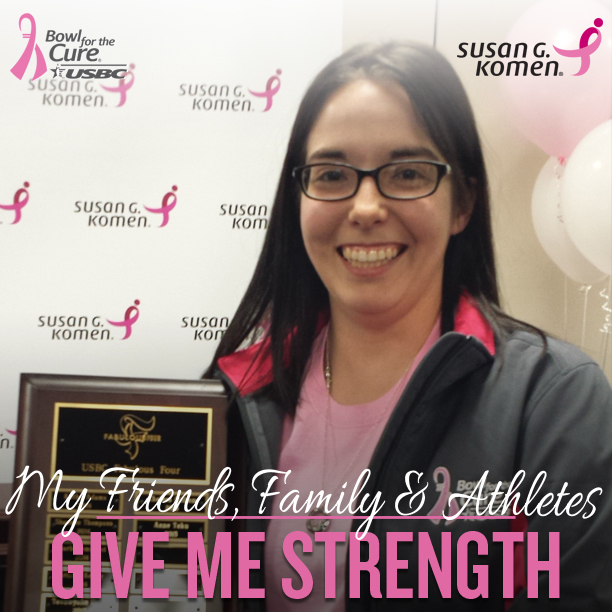 When you are an active 23-year-old coaching collegiate bowling, breast cancer is the last thing on your mind. My life was forever changed on September 22nd, 2013. That’s the day I first went to the ER for irregular symptoms. The next week was a whirlwind of doctors, tests, poking, and prodding. I knew what was coming before I even heard the words come out of the doctor’s mouth. They don’t normally call to tell you to make sure someone comes with you to your appointment, take people to rooms that arrive after you, or take you to the doctor’s office instead of an exam room if everything is fine. I was diagnosed with stage 0 breast cancer on October 3rd, 2013.

The hardest part for me wasn’t that I was going to have to go through so much over the next year and the rest of my life; it was having to tell my teams that their coach had breast cancer. It was telling them that I probably wasn’t going to be able to be at every practice and every tournament that season. I didn’t want to let them down. They took it better than I ever thought they would. I was so blessed to have the group of student-athletes I had and I couldn’t have asked for a better group of student-athletes to go through this with.

The second hardest part was letting people in. I have always been an independent person. I kept to myself, did things for myself, and never really asked people for much help. I had no choice on whether people were able to help me or not. I had to let people help me and do things for me for about 6 months and I am so thankful for my mom and friends that were there with me the whole time. Without them I wouldn’t have been able to do anything which would have made going through the process a lot harder than it was.

I had my final surgery on October 8th, 2014. I am back to bowling regularly now but still continue to regain all of my strength. When I received my diagnosis I also learned that I have the BRCA 2 gene mutation. This means I am also high risk for ovarian and pancreatic cancer. I have started screenings for both and will continue to do so every six months. I know challenges are going to continue to pop up throughout the rest of my life but right now I am enjoying coaching, bowling, family, friends, and life. I encourage everyone, no matter what age, if something doesn’t look or feel right go get it checked out. I waited as long as possible because I didn’t want to feel stupid if there was nothing wrong. Now I would rather feel stupid and have nothing be wrong then not go and have life ended too soon.

Different things give different people the strength to get through something like this. For me it was my family, friends, and athletes. My mom dropped everything she was doing and flew to be with me for my initial biopsy in September and didn’t leave until we left in May for the summer. She was there for me and helped me with everything I needed, and I wasn’t always the best patient. I can never thank her enough for dropping everything in her life to come take care of me.

My friends supported me from the very beginning. Some of them took time out of their busy coaching schedules to take my teams to tournaments when I wasn’t able to. Others traveled nine hours just to sit with me and help take some of the weight off of my mom’s shoulders. My athletes were the other group that gave me strength to push through. I didn’t want to leave them without a coach for an extended period of time. I wasn’t going to be able to let myself sit at home while they were trying to compete without me. They were the biggest part of my life and I wanted to get back to them as soon as I could. They were all very understanding and helpful. If I was in pain and couldn’t drive or needed help carrying my bags, they were right there. As a coach sometimes you feel like another parent but there were a couple of times they had to parent me and stop me from doing something I shouldn’t have been doing yet.

I could have taken my cancer diagnosis and made myself miserable. I could have focused on the negatives and made my recovery time last a lot longer than it did. I am a firm believer that everything happens for a reason. I got cancer at 23 for a reason. Having cancer gave me the opportunity to experience a once in a lifetime adventure. I was chosen as one of the 2015 Bowl for the Cure Fabulous Four.

With being chosen as a Fabulous Four member, I, along with three other amazing women, were given the week of a lifetime. First, I was flown to Dallas where I met Tavawyaha (Tee) Batts, Angel Crosby, and Ann Taku, the other members of the Fabulous Four. While in Dallas we were taken on a tour of Susan G Komen headquarters and given a Belk shopping spree and makeover. We also got to go to the international training center in Arlington and work with Team USA coach Rod Ross and members Stefanie Johnson and Shannon Pluhowsky. After that we were flown to Reno to compete as the Fabulous Four in the 2015 Women’s Championships.

I want to thank some great people because without them this experience would not have happened. Thank you to Rachel Bryan and Ashley Cunningham from Susan G Komen for taking us around headquarters and joining us for our shopping spree and makeovers. Thank you to professional bowler Kelly Kulick giving us her time and letting us pick her brain about bowling and many other things. Thank you to Arleen Hernandez, Jason Thomas, and Tramon Thomas and the many other USBC employees that helped make this trip happen. Finally, thank you to our fearless leader Jeff Brown. Jeff made sure we had everything we needed. He gave us his time and energy for an entire week. We made him a part of our families.