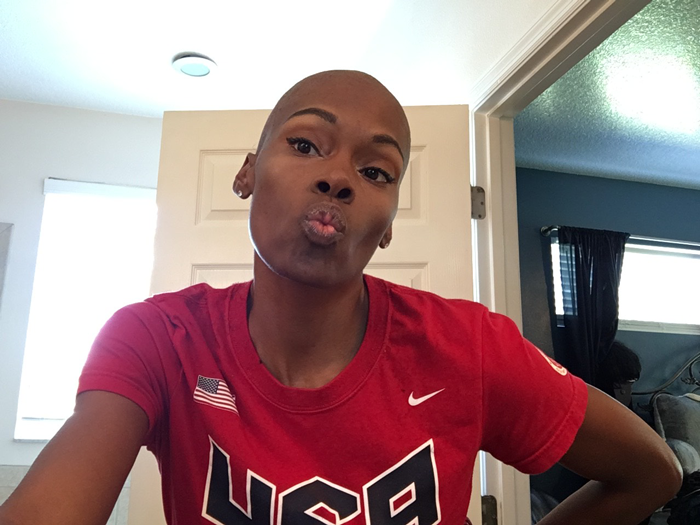 Even though most know me as a Team USA high jumper, first and foremost, I am a mother of 3, a wife, and a believer. My kids are aged 6, 8, and 12. In June of 2019 I was diagnosed with triple-negative invasive ductal carcinoma, a very aggressive form of breast cancer. As you can imagine, I was terrified about what would happen to me, and what would happen to my family without me. That fear quickly turned into hope when I heard the stories of others who had been cured using the same resources I had available to me.

I found the tumor while doing routine self-breast exams. I ultimately underwent a double mastectomy, removing both breasts, to increase my odds of survival and to give myself the best chance at beating the disease. Due to the very aggressive nature of this type of breast cancer, I would need to complete six rounds of chemotherapy, possibly radiation, and I have a lifetime of monitoring. Other forms of breast cancer have hormonal treatment alternatives to chemo. However, with Triple Negative cases making up only 10%-20% of all breast cancers, lack of research makes chemotherapy still the most effective option for treatment. Anyone who has witnessed a friend or loved one endure chemotherapy knows that it can be a ruthless and unforgiving process. Most patients experience nausea, vomiting, pain, weight fluctuations, and hair loss, but other more severe side effects are a possibility. For me, it is no different. The treatment has the potential to be very difficult on my body, and the prospect of competing at a high caliber in the near future will not be easy.

As the American Record holder both indoors and outdoors in the Women’s High Jump, placing your chips on me has been a safe bet over the last decade and a half. However, after finishing 4th in the most recent Olympic Games, I began working and building my business as a motivational speaker and was competing less and less. Even though I took this much-needed break from competition, I never counted myself out. I had been secretly training and was planning on coming to the US nationals and surprising everyone with a stellar performance, earning a spot on the World’s team this summer in Doha, and starting my final push to compete on the Olympic Team”. However, that didn’t happen. Instead, I watched the US nationals from home while recovering from 6 hours of necessary, extensive surgery.

The unfortunate turn of events had me questioning if I was even going to try to pursue making a 5th Olympic Team. It wasn’t until my oncologist encouraged me not to alter any plans that I had for my future that I reconsidered and decided that I would train through chemo and tryout for the Tokyo team. I remember feeling defeated in the cancer center of Orlando. It had only been a few weeks that I knew about the cancer, and it had already taken so much from me. My exact thoughts were, wow, you took my body, and now you are going to take my dreams too! But with the doctor telling me it was okay to train and go for it, I felt happiness for the first time in weeks. It is a common belief that mindset plays a huge part in positive experiences when patients battle cancer. Having something to look forward to can be helpful getting one through hard times and pushing forward toward what’s ahead. Training for the Olympics was something familiar enough to me that it would help me focus beyond my chaos toward a positive experience awaiting me in the future. I knew without a shadow of a doubt that the media storm that comes from the Olympics would be a great way to bring attention to early detection, breast cancer awareness, and ways to fund research. I felt a sense of responsibility to use this platform to fight for the 1 in 8 women who will be diagnosed with cancer in their lifetime. We have to force change to happen.