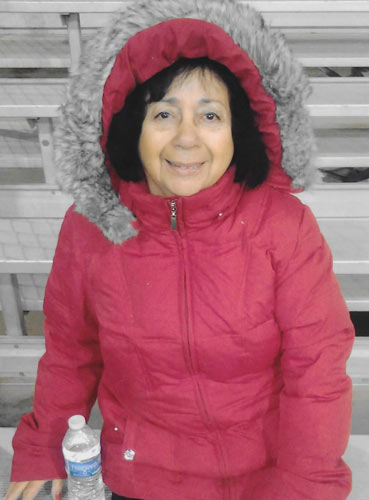 Here is my moms story. October of 2014 my sister and I received a phone a call from our Dad back in Puerto Rico that changed our lives. We could have never imagined that this would be the beginning of a year full of emotions , full of ups and downs.  He called us to give us the bad news of what the obgyn doctor told him about the results of our mom’s annual breast exam. He told us they found a big lump on one of her breast’s that may be cancer. We were heartbroken . I didn’t know what to think, what to do or what to expect.  We were scared to death for the life of our mom. We didn’t want to lose her. She was a healthy women in her 70s that looked more like she was in her 60s. She was a young spirited women and didnt look like her age at all. She was healthy and traveled a lot to come visit us here in dallas to enjoy time with the family and grandkids. She loved her grandkids. They were her life! She was always so happy and playful. She had a soul of a child. She couldn’t harm any one. She was always full of life.

A few weeks after, the biopsy  results came in and they were worse than we expected. It showed the mass was cancerous and it had spread into her lymph nodes. She needed to start treatment right away. It took a few months to get everything in order for her first chemo because we wanted a second opinion just to make sure we made the best decision for her.

Months later on The week of Valentines 2015 my husband surprised me with the most caring gift i had ever received that i will never forget and will be forever grateful to him. He surprised me with an airline ticket so i could go surprise my mom on valentines day and take her out to dinner.  I would be able to be there for her first chemo treatment to support her. I wouldn’t have to worry about our 3 kids, he would take them to school, sport activities and everything they needed to do and i just needed to focus and be with my mom for awhile. He has been everything i needed him to be to help me get through the toughest year of my life . I struggle so many days  always worrying about my mom, she was  back in Puerto Rico and i was here in Texas . All i wanted to do is  be with her but knew i had family  i need to take care of too.

Sharing your personal story can provide solace to yourself and inspire, motivate or comfort others.

I went to Puerto Rico to surprise my mom on that Valentines day and when she saw me she started to scream and was in tears of happiness that i was there. I will never forget her face on that valentines day. I spent time with my mom before her chemo and made sure she had everything she needed. On her first treatment she did very well. She didn’t have many side effects. She was very hopeful to beat this cancer and her family always tried to keep her positive about it and always motivate her.

A few months later on that summer in July after a few treatments of chemo, the doctors decided the tumor had shrunk enough and it would be best to remove her breast. I traveled again to Puerto Rico , while my husband took care of our children so i could to be there and take care of her. She seemed very secure and positive when i was there. She wasn’t as scared as i thought she would  be.

After the surgery she did great. We were all so very hopeful, thinking she looked so strong that she really was going to be able to fight this thing. A few weeks later she wasn’t feeling very good.  The doctor said she needed to have a couple more chemo treatments just to make sure all her cancer was gone. She didn’t really want any more treatments but we did what the doctor advised would be best for her.

She started chemo again a month after her surgery. This time she began having bad side effects right away.  My dad was really worried and thought something was different this time. He called the doctor, and she was prescribed medicines for her nausea and vomiting. She still felt the same and was like that for a couple days not being able to hold anything down. My dad decided to take her into the emergency room. They gave her more medication and IV solution and released her a couple hours later. She seemed to be fine for a couple hours until she got home but became sick again. My Dad called the doctor the next morning to see her at the oncologist. He told her to bring her in immediately. By the time she was there they found her so dehydrated that her kidneys were failing and they had to int-abate her.

I flew to Puerto Rico again thinking this was it and she may not make it. She was in the ER for weeks, sedated, int-abated, and was being fed through a nose tube. The hospital in Puerto Rico was an hour away from my dad’s home. We drove there every single day just to be able to see her for an hour a day in case she woke up or there was any news. We spent long days hoping she would get better. Until she finally opened her eyes and began responding . We were so happy. We thought it was the start of her recovery. She was responding, making signs with her hands, asking when they were going to take her tubes out and  when she could go home. We kept repeating to her that she needed to be strong so she could recover and  come to Texas to stay with me and her grand kids.

Doctor said they would try to take her tubes out but didn’t know if she would  be able to breath on her own and may have to do an emergency Tracheotomy.  This could be reversed once her throat had recovered. We were scared a little but always praying that they wouldn’t need to do that. They made the first attempt but it failed because my mom got scared and couldn’t breath. The tried again after another week but ended up doing the tracheotomy. She was doing well afterwards, talking, making signs, smiling and even making jokes. I left Puerto Rico again but she was so much better and on the road to recovery. I needed  to get back to my children. Left her with the hope that in a few months i would see her again here in Texas with me. I got calls everyday from my family telling me she was recovering. The doctors  were planning to send her to the rehabilitation center so she could get back on her feet. She had been in the ER for 2 months already.

Early morning of October 10th, of 2015 i got the call that my mom had a cardiac arrest and had died. I was in shock. I kept telling my husband this wasn’t real, it was just a bad dream. I kept questioning God, why my mom? she was an amazing person. But I guess this was God’s will and we needed to accept it. I know my mom is not suffering anymore and she is now resting with God. I am thankful that I was blessed with this wonderful caring and loving person. She will always be my little mommy and I will never ever forget her.