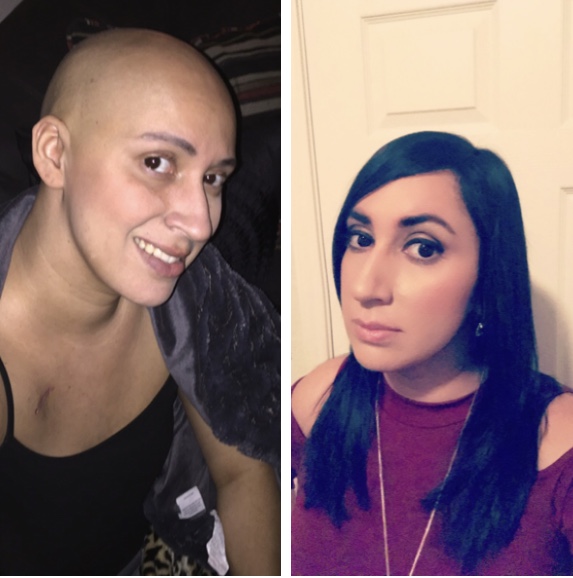 I was 27 when I was diagnosed with Stage IIIA estrogen positive breast cancer. My husband and I had been married for eight months and we were in the process of building our home when I was diagnosed. I felt completely normal prior to my diagnosis. I ran a 5k as if it were nothing a few weeks before. I immediately began treatment. I had 8 excruciating chemotherapy sessions. They took the life out of me. I got sick every two weeks for at least 10 days, and then it would all come back once I had treatment again. After I finished chemo, I had my left mastectomy where they removed 15 lymph nodes. I then underwent 28 rounds of radiation. The surgery and radiation were nothing in comparison to chemotherapy. A few months later, I had a right mastectomy and had my latissimus flap surgery to utilize the skin to reconstruct my left breast. That surgery was awful, as it felt that my back was sliced in half. I then had two more reconstructive surgeries a few months after that. After one surgery, my left implant got infected, and I had to be on antibiotics for 6 months. Just when you see the light at the end of the tunnel, something suddenly darkens that light. Having breast cancer is a roller coaster of emotions. Through it all, I learned to live and be happy. I do the things I want to do, and I never second guess myself. Two days ago marked my four-year anniversary of my diagnosis. I’m stronger than ever. I eat right and exercise daily. If you saw me, you’d never know I was ever ill. I even covered my mastectomy scars with beautiful tattoos that hide the atrocity I had to live through. I’m 31 now, and I’m alive. I’m happy and I’m free of the disease that tried to take my life away from me. My advice to anyone that is going through this is to surround yourself with people that truly care for you. I never would have survived without the love from my husband, family, and friends.