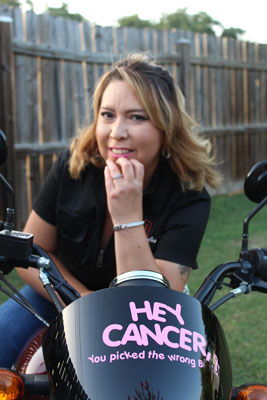 This my story about my wife (Lisa Rodriguez) who is a three time Breast Cancer fighter.

In April, 2011, my wife was diagnose with stage III Breast Cancer, she had a lump on her right side of her breast. When we first found out about the cancer we were devistaded and I couldn’t breathe, and all I wanted to do was cry. What do you do when you get this kind of news! Now it was time to get ready for the next step, mastectomy of the right breast. At first I didn’t know how was my wife was going to take the news of part of body being removed.

After the surgery the doctor had removed the breast and fourteen limp nodes, which four of the limp nodes were cancerous. Afterwards, it was time for chemo and radiation, which my wife did for almost six months. After a year and half my wife was doing to pretty good trying to stay positive and happy! Now, it was time to proceed with reconstruction of the breast, which went on going with several surgeries. During the last completion stages of the reconstruction surgeries my wife started to feel pain in her head. Then, she started to get a little dizzy and started to get light headed. When I started to see her walking down the hall way and holding on to the walls, I knew something was bad….So I convince her to go to the ER.

When we arrive I think the nurses and doctors knew it was bad because they ordered a CAT and MRI right away. Well, in the summer of 2012 the cancer was back but in her head, she had a tumor of the size of 4 centimeters. Man, again I couldn’t breathe!…I was so mad at GOD…why are you doing this to us again!! So, now it was time for surgery of the brain, In October 2012 they removed the tumor. They surgery went well…thank god!….I remember telling my wife you can beat this….”I’m here to fight with you”. After several months of recovery from the head surgery in December of 2012 the tumor came back for the third time!…..That’s when I really broke down and said GOD your taking my wife away aren’t you?……The doctor suggested we do something different this time instead of surgery because it was too dangerous going back into the head again. He suggested “Gama knife” radiation. The radiation went well so, far the tumor has shrunk fifty percent, my wife continues to have head pains, body aches and every once in while she gets an infection in her arm call cellulitis.

Yes, my wife gets sick every once in a while and sometimes she’s bed rested for a couple of days but people look at and say “WOW YOUR WIFE LOOKS AMAZING I CAN’T BELIEVE SHE HAS CANCER”…..The reason I’m sharing this story of my wife’s battle of cancer because I know there’s a lot of women and men who are battling the disease and some time’s they feel like giving up!….Well my wife hasn’t gave up! And I think she is the strongest woman to fight this battle. One more last thing before I close this letter, my wife has always said to me, my two wishes before I die. First I want a motorcycle, second I want to renew our vows and have a big wedding with our kids. Well in April I bought her a new Harley Davidson and on July 18, 2015 my wife and I had the most beautiful wedding with our kids, family and close friends. I’m proud to say my wife is a three time breast cancer survivor and rides a Harley!!!! Gary Rodriguez