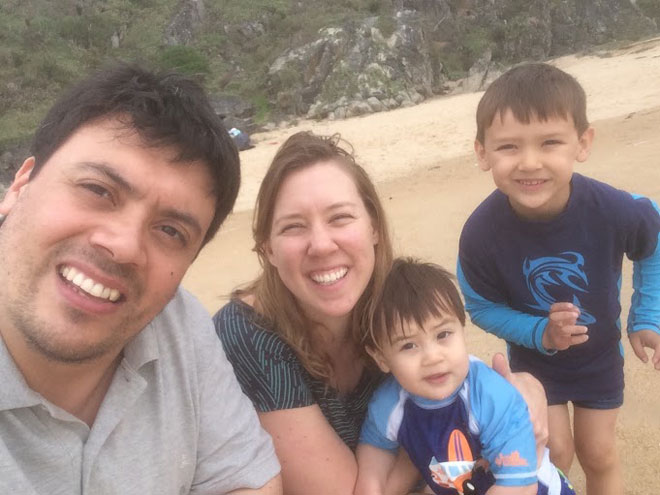 I was diagnosed with Stage 3 breast cancer at the age of 37 while 7 months pregnant with my third child. At diagnosis, I was shocked because I had never smoked, drank, had breastfed my other two kids and had always been active and eaten healthy. It seemed so unfair. At the time, I had a 3-year-old and a 7-year-old. My husband was a busy orthopedic surgeon at the University hospital and we had recently relocated to our new city, where we had some new friends, but no family. We began to solicit help, knowing that my treatments while pregnant, would make it difficult for me to care for our other two boys. Many ladies from a local bible study supported us, praying with us and bringing us meals. The next week, I began chemo while pregnant. We were so worried about the baby. However, the doctors assured us that they were giving me chemo drugs that were approved for pregnancy and that there was no placental transfer. I underwent broad based chemo for almost 3 months prior to having my baby. At 37 weeks, they delivered my third baby via C-section so that they could begin more aggressive, targeted chemo as soon as possible. I am so overwhelmingly grateful to report that my third baby boy was born happy and healthy, at a whopping 9 pounds 6 ounces! Two weeks later, I began targeted neoadjuvant chemo alongside the broad-based chemo. When my baby was two months old, I underwent a double mastectomy. The doctors gave me the best news after the surgery- that I was cancer free and that they had found no traces of cancer in the lymph nodes! Although I was so happy about the news- the recovery was hard enough as it was, but the most difficult part was that I could not pick up my baby for a month. Thankfully, friends and family flew in to help. My sister, my mom, my aunt and a close friend all came to hold the baby and we hired night nurses for a month. It was just so difficult not to be able to care for my baby and to be going through all of this at the same time. I was so happy when I finally began to regain strength.

After recovering from my surgery, I decided to undergo 6 weeks of radiation therapy based on the aggressiveness of my original tumor and young age. It was tough to go to the doctor every day and to know that the radiation was damaging healthy tissue alongside potential cancer cells. But I kept imagining myself in a boxing match with the cancer cells and I didn’t want any of them getting back up. After all that I had been through, I wanted to keep the disease away.

Finally, after radiation, I had to continue to receive the herceptin/perjeta treatments for another 8 months after having the baby. Thankfully the treatments were every 3 weeks and I had some time in between to recover. My sister and I spoke on the phone at one point after one of my radiation treatments and she just had a baby a few months after I had my baby. She said that her and her husband had been praying for me and that she didn’t know how I was doing it with three kids and cancer treatments, because she was just exhausted with one baby. I told her, “Well, we’ve got grit around here!” and I never forget that. Every day of the treatments, I would flex my biceps, both physically and mentally and confirm my strength and ability to mother and care for my children, even when I was not at my best. Prayer gave me strength to get through and my family all provided me with the support to get healthy!

My children continue to thrive and bring me joy and laughter. My three-year-old continually asks about mommy’s surgery and tells strangers at the park proudly that his Mommy had surgery on her breasts, but now she is all better! (face palm).

I have learned a great deal through battling cancer. Most importantly, I have learned how to remain positive and keep the faith in the face of adversity. My faith has been strengthened and every day I am grateful for the gifts that God has given me and my family. I hope to be able to pass on the generosity that has been shown to me to other women battling cancer. Thank you for listening to my story.