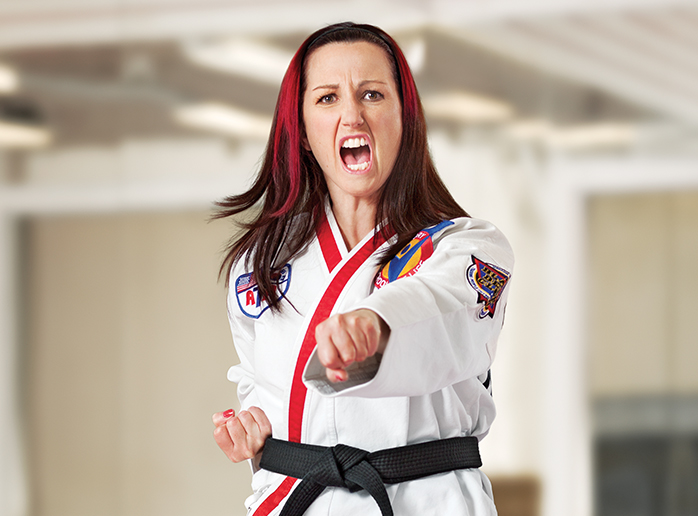 Although a trained fighter, Maura Bivens never expected to cross-swords with breast cancer. And she was well on her way to a black belt when the disease was first diagnosed. It was triple negative, invasive, and a routine chest x-ray later revealed it was stage IV. But not once did she surrender to the disease. This is the story of a tenacious woman who survived despite the odds. This is Maura’s story, in her own powerful words.

On her initial diagnosis

I honestly didn’t think my test results were going to come back cancerous. It didn’t make any sense to me at all, because there’s been no history of breast cancer in my family, I do not smoke, I did yoga, and I had an active prayer life. So I was completely shocked.

The hardest part was the initial diagnosis. First of all, it took so long for me to get in to see a doctor when I knew I had a lump. And then when the doctor’s office called, it was during the holidays, so a nurse had to tell me that it was cancerous. And she gave me the wrong information.

She told me that I had DCIS. I didn’t know what that meant so I looked it up myself. According to the research that I was doing, it would be a minimal treatment. So that’s how I presented the news to my parents, my husband Mark, and the kids. But when I went to pick up my medical reports, I found out it wasn’t DCIS — it was invasive. That was a game changer.

“I didn’t like to go to bed because going to bed means you’re super sick, so I was more of a couch person.”

Prior to my initial diagnosis, I was mid-rank, almost high-rank in Tae Kwon Do. So here I am during treatment, couch-bound, playing with my arm thinking, “There used to be muscle there.” Meanwhile my friends are going on getting their belt ranks, and I’m questioning if I’ll ever get it back. But then I was actually surprised at how quickly I started practicing after that last radiation treatment.

I got my 1st Degree Black Belt in that December.

On her second diagnosis and second opinion

I went in for a routine chest X‑ray just over a year of being diagnosed, and when I came home the doctor’s office had already called. I didn’t even consider the possibility that it would be back, but it was back, and it had metastasized. So now I had breast cancer in my lungs. And when my oncologist told me this, she was crying, my husband was crying, and I didn’t quite understand what the big deal was.

After my second diagnosis, we talked about doing a clinical trial. Before we did that, though, my husband wanted me to get a second opinion, and the people he worked with had a connection at MD Anderson.

“Everything you’re doing at home is everything we’d be doing at MD Anderson. The trial you’re trying to get into is great. You should stay in Las Vegas and enjoy the time you have with the kids,” said the doctor at the world-renowned clinic.

And because of the way he phrased that, Mark pressed further.

“How long does she have?” he asked.

“Twelve to eighteen months at the most.”

I was all set to go into the clinical trial, but for some reason I was rejected. So I did chemotherapy for four months, and it was brutal. I was going to ask my doctor to let me take a break and regain strength. I really, really, really wanted to do the Susan G. Komen Race for the Cure, and I realized if I stopped chemo then I’d be strong enough to do the race. But the doctor said, “Let’s do one more round.”

Well, that was the last time I ever had chemo and nothing new popped up for months. Then something lit up in my lungs again. So my doctor recommended doing something called the CyberKnife, which is a beam that could specifically radiate the tumor in my lungs.

Mark and I had our reservations about it, because we were used to treating the cancer with chemotherapy, which is systematic, meaning it covers you everywhere. But the side effects of the Cyberknife were so minimal that I was willing to take the chance. So we did the treatment, and then a couple of months later another one popped up. We did it again.

Amazingly, even though we weren’t treating it systematically, that was the last treatment I’ve had in three years.

Martial arts was very good for me at the time, because it was all about setting short‑term goals. It gave me the strength to say, “I can do this.” With training, there’s pain involved — a lot, often. But the instructors would always tell me, “You’re a Black Belt. There’s going to be pain, and you can handle it.” So I started to believe it. And that mentality translates to other things in life, too.

What would you tell someone who’s been recently diagnosed?