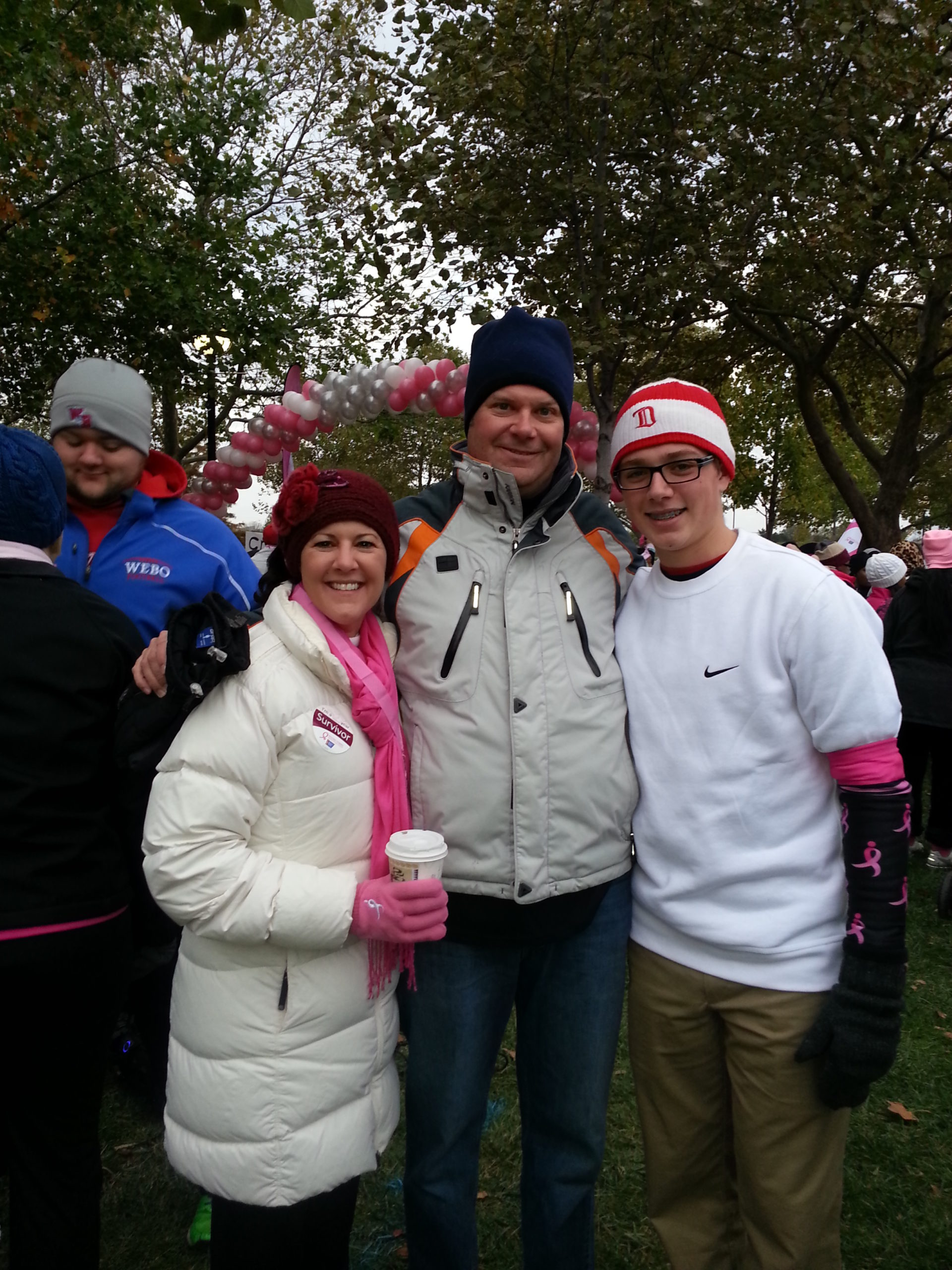 Building Strength from Others

“The worst thing a person can go through is losing a child.” This was said to me so many times after the death of my 10 month old son that I couldn’t begin to count. And they were right. It was the most difficult time of my life. Yet, during that time I could have moments where I appeared unscarred, unbroken, I could pretend I wasn’t in pain. That was 19 years ago and while I still miss my son and continue to cherish his memory, I have moved on with my life.

The next challenge came in April 2004. An infection in the lymph nodes in my neck resulted in 2 surgeries and a near death experience. 2 weeks in the hospital, I then went home to recover and eventually back to work. It seemed like a blip in time, like being in a car wreck. It was not a lingering illness and I had a clear road to recovery. I felt lucky to be alive and took nothing for granted.

April 2012, I was diagnosed with stage 1 triple negative breast cancer. A life time career in molecular diagnostics had proved me a background and amply resources to better understand my diagnosis.

January 2012 I had my annual mammogram, which was negative, but 6 weeks later I found a lump on my left breast from a self-exam. How could this be? This was an aggressive form of breast cancer and one with the least amount of data. The treatment came swift and severe. I underwent a 16 week treatment program of bi-weekly IVs of Chemotherapy, AC, known as the red devil from other survivors, and Taxol. Both drugs brought along their own but equally challenging side effects. Once chemo was over I choose to have a bilateral mastectomy . “God doesn’t give you more than you can handle,” my mother always told me. My faith was strong but did he really thing I could handle another challenge? Thinking to myself, “I’m not THAT strong .” We didn’t have family close by and had just moved to a new state 8 months ago.

What I didn’t plan on was what would come next. My neighbors, and co-workers rallied around me. It was not up for discussion, they WOULD be helping me out. The angels that showed up in my life to support me and my family was overwhelming. For the first time I had to accept help. THIS struggle was visible. Try as I might I couldn’t hide my symptoms or pretend it wasn’t happening. Every day I worked towards the finish line. I approached each chemo treatment as if I was running a marathon. Each one was 3 miles, and at the end of journey, the surgery, that would be mile 25 and 26- the last and hardest but with an end in sight. My son and husband were my biggest cheerleaders. My cousin Tammy, my rock when I just needed to cry, and my neighbors who brought food, went on walks with me and some, shared stories of their own battle. I took help like taking water and Gatorade during a race. I listened to the folks cheering me on and drew strength from it.

Now, I’m not a marathon runner. I had run a couple of half marathons in my life prior to cancer but the one I’m most proud of is my 3d half marathon. I ran the Indianapolis mini-marathon (13.1 miles) in the spring of 2013, just a few months after my final reconstruction surgery. One of my neighbors ran with me. My husband and son were cheering me on, and at the end, my son puts his hand on my shoulder and says, “Well, its official mom, you are back!”