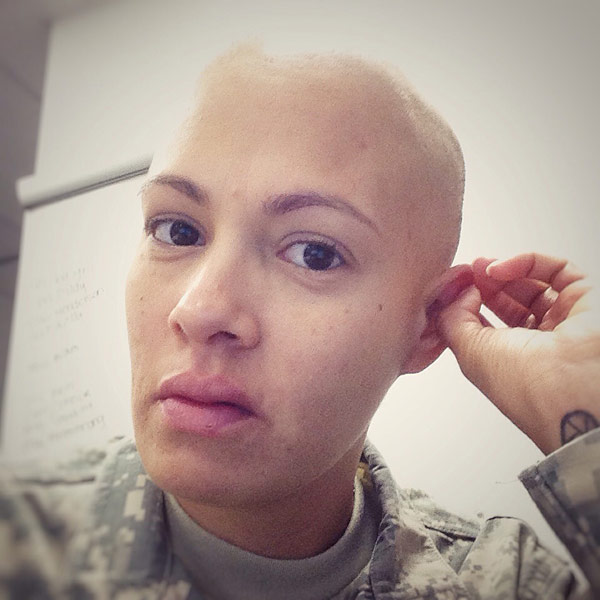 At 34 years old, Wilmarys Roman was seeking a job in the U.S. Army and embarked on her journey for basic training. Days in basic training weren’t easy – she was up early, had grueling exercises all day, and then in bed early to get rest for another day of training. On top this physical adjustment in her life, there was an emotional adjustment for her, too, after leaving her family and being removed from all methods of communication. Soon, she would face another hurdle that she never imagined encountering.

In January 2015, Wilmarys went to change after finishing a day’s exercise and found blood on her sports bra. She was confused – where was this blood coming from? Initially, her instinct was to shower and wash it off. That’s when she felt a lump in her breast. Without any resources at her fingertips, other than the knowledge of her fellow trainees, she was told it could possibly be breast cancer. Unfortunately, she had a feeling that what they told her was true.

Wilmarys approached a sergeant, who expressed concern, and took her to a doctor. Immediately, she was scheduled for a mammogram but her diagnosis was held up. It wasn’t until she completed her basic training that she went to an Army school and scheduled additional doctor appointments there, where she was given the news that she feared the most: triple negative breast cancer stage 0. Wilmarys and the team of doctors took the necessary next steps, such as surgery, where they then found that her cancer was, in fact, triple negative stage 1.

Thoughts buzzed in her mind, not knowing how the Army would accept this news and where her future position stood in the military. She was committed and wanted to serve her country, so she stayed in the military and accepted an office job to continue her contributions, which eventually led her to her current position in Army public affairs. On top of making the decision that would direct her career, Wilmarys still had chemo treatment to undergo every two weeks. It was through the unwavering support of her family, friends and chain of command that she was able to give the breast cancer her best kicking.

Not knowing what her fate would be at the beginning of this journey, the Army played a positive role in her fight. What was difficult at first, like not having time to cry or talk to family or friends without being able to use her phone during the day, is what made her stronger in the end.

“Being in the Army didn’t give me time to feel bad about what was going on,” she said. “The Army helped me become stronger through this journey because it pushed me to do better – I didn’t want to be the weak soldier.”

Wilmarys is continues to stay strong, while attending her routine doctor appointments every 6 months. In December 2016, she will have her breast reconstruction.