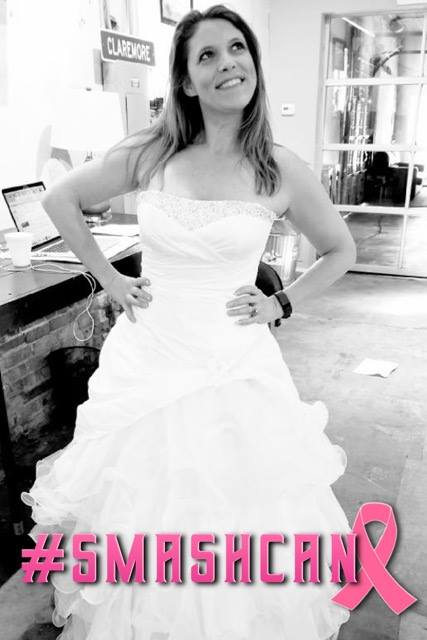 On a gray, rainy, February morning, I was working my son’s Cub Scout pancake breakfast. I’d spent four hours mixing endless bowls of batter, doing my best to keep busy while making small talk with the other parents. I’d surreptitiously check my phone, because I was waiting for The Phone Call.

It came as we finished washing three electric griddles and what felt like 14 mixing bowls. The church kitchen was noisy, so I took the phone and went to the back door, which was propped open. Rain drops bounced off my jeans as I answered the phone.

Dr. Kyle Hrdlicka, whom I’d met in a professional capacity just two days before, dropped the news swiftly, as if he knew it would be less painful if he got it out of the way. Like ripping off a Band-Aid, I suppose.

“The biopsy came back and it is, indeed, breast cancer.”

I didn’t feel anything. Not the rain, not the cold wind blowing in the door, not the heat from the kitchen behind me. I was numb. Shocked. The first thing I did feel were my husband’s arms around me from behind, as I stood there and listened to the doctor talk about surgery, radiation. Chemotherapy.

The doctor was leaving town the following Monday, on a church trip to Israel. I asked him to say a prayer for me, as I figure Holy Land prayers must count for extra credit. Also, my little boy’s name is Canaan, so that maybe would give me some bonus points, too.

Dr. Hrdlicka said, “I’ll do you one better. I know you’re on Facebook a lot. When I go to the Wailing Wall, I’m going to write your name on a piece of paper and put it in the Wall. And I’ll go live on Facebook. You watch for it.”

I knew then that I was in good hands.

He told me that I would be fine. I responded with, “Do you promise?”

Then we hung up. The Phone Call that changed everything lasted exactly sixteen minutes.

Leaving my son with my husband, I walked out of the church, into the rain. I got in my car and drove to the lake, where I sat for an hour. I called the people I needed to call. I sobbed, I prayed out loud, I watched the rain batter the concrete trail I’d run countless miles on and make waves on the water. The water I’d swam in for the first time the previous August, competing in my first triathlon. What would this summer bring?

Finally, I left the lake. I texted my friend Crystal and asked her to meet me. We met at her office, which is more of a cozy nest with plenty of glam accents. A girly, glamorous haven, really. We sat on her couch, littered with pink and plush pillows, and I told her the news. I cried. She prayed. And then her Wonder Woman movie poster caught my eye on the wall behind her. I’ve never seen the movie, but the tag line at the bottom caught my eye.

That’s it. That’s how I’m going to get through this battle. I may not be Wonder Woman, but I can be me. And that’s good enough.

Late that evening, I took to social media. I’m on facebook constantly because of my job, and also because I’m addicted to it, so I knew that was the easiest way to spread the word. What I didn’t expect was the sheer volume of response. More than 400 comments came in, along with countless private messages and texts. The offers of help were astounding. I’m incredibly blessed to have a village of family and friends and even acquaintances that are patiently waiting in the wings for my call.

The next afternoon, we went to church. Justin, my husband, and I had scheduled a visit with one of the pastors already. We told him the news, and Pastor Bill prayed over us, too. That night, our campus pastor, Rob, called us on a discreet tip from Bill. We don’t know him well, but the fact that he went out of his way to call us on a Sunday night spoke volumes. I know without a doubt that our church family will be behind us all the way.

Now I wait until I get the Next Phone Call, which will tell me when surgery is scheduled. It will be within three weeks, if not sooner. I’m not entirely sure what to expect, besides pain. I think the uncertainty and the fear of the unknown are the worst parts. I don’t know what they’ll find. I know that we caught it incredibly early, which bodes well for me. But what if it’s not early enough? What if it’s spread already? These are the thoughts that niggle into my brain when I’m not busy, when I’m alone.

The question that so many have asked me in the past two days is, “How did they find it? Was there a lump? Why did you have a mammogram when you’re only 38?”

My mom and I went to a ladies event last October. The mammogram department from the local hospital was there, and they mentioned to my mom that she needed to get tested. I, somewhat smugly, joked, “I don’t have to do that because I’m not 40!” But, no. Apparently 35 is the new age, and it doesn’t require a physician’s referral anymore. It’s covered by insurance. So I made the call, and went to the appointment. I got called back, which I had been warned of, since it’s common to want to take another look for a first mammogram. Since I’d been warned, I didn’t worry. Not really. I’m only 38.

But now, even though I’m facing the most difficult challenge I’ve ever taken on, I’m so glad that I got screened. Because you don’t know. There doesn’t have to be a lump.

I’ve heard stories about people going to the doctor for a check-up, and being told that they have cancer. I always wondered, “How do they not know? How can people be walking around full of this and have no clue?”

I’m one of those people now. I’ve gone blithely through my days, dropping my son at school, going to work, going to the gym, drinking wine, watching hours of Netflix and HGTV, worrying about losing weight, and I didn’t know.

Granted, mine is small. I’m grateful for that. I’m grateful for the mammogram ladies who told me to get checked. And I hope that at least some gals in my life will take heed of my advice, and don’t wait until 40. Don’t put it on the back burner. You wouldn’t miss a hair or nail appointment. Don’t miss this one.