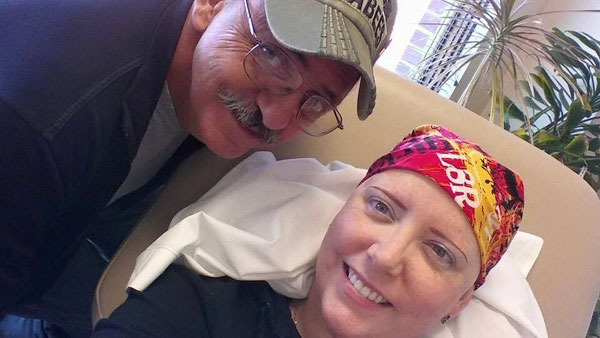 First of all, I would like to say, I have been a supporter of the Susan G. Komen foundation for many, many years. I have participated in the Komen CNY Race For the Cure events as a participant, and as a volunteer. My step-mother, who I am very close with, has lost her sister and mother to breast cancer. She asked me to join her at the race many years ago and I have been supporting the cause ever since.

Imagine my surprise, when one evening, in October of 2014, I find a suspicious lump in my right breast. I was laying on my couch one evening, watching tv, when my cat, Gracie, jumped on me. My arm was resting up over my head and she landed on me and I felt pain. I rubbed the spot and that’s when I found it. I had a mammogram 2 years before and was told I had fibrous, dense breasts, so I wasn’t too concerned but made a mental note to get it checked out.

A couple days later, I made a call to my doctor and her nurse immediately took action. She spoke to the doctor who wanted me to get an ultrasound and mammogram right away. I went for the tests, which led to a core biopsy. That’s when I got nervous. I had a hard time believing that at 38 years old, with no family history of breast cancer, that I could be going through this. It had to be something else. I didn’t even tell my parents. Why make them worry, when it could be nothing? A few close friends knew something was up, but I assured them, “it’s probably nothing”.

My appointment with the surgeon was coming up and my husband was out of town, traveling for work. I had a gut feeling that I should not go to this appointment alone. I ended up asking my friend Jennifer, to meet me there on December 5th. As the doctor read me the pathology report, I grabbed Jen’s had and I heard the awful news. “It is cancer.” I was stunned, and then I broke down. All I could think about was my kids. I didn’t want them to leave them. And even if I was to make it through this, how was I going to take care of them, while I fought? My husband worked out of town for months at a time. I had a new job with no sick time and just having built a new house the year before, we had no savings to speak of. How were we going to survive financially? All of this was going through my head, all at once.

The next thing I know, I was being scheduled for surgery. I just wanted this cancer out of me. Over the weekend, I called my parents. I was fortunate that the surgeon had an opening the following Monday and on December 8th, I had a lumpectomy and sentinel node removal. My father and step-mother were there the whole time.

A couple of weeks later, I met with the oncologist. It was determined I would need chemotherapy, due to the fact that I had a rare type of tumor and that I was young, compared to the age of most people that had this type of tumor. He wanted to be aggressive to lower the chances of a recurrence.

Thursday, January 29, 2015, I had my first treatment. I had had a mild cough for weeks but no one was too concerned about it, because I had no other symptoms. By Sunday evening, I had gotten much worse and developed a fever. I knew something wasn’t right. I made a phone call early Monday morning and was told to get to the ER. My husband was due to leave for work out of town again, but he insisted on taking me to the hospital. When they diagnosed me with the flu and admitted me, I urged him to go. Again, there was huge pressure to keep up our finances. We could not afford for both of us to be out of work. So once I was settled, he left. It was just the flu. Thankfully, my son, who was nearly 19 at the time, was able to see that his sisters got off to school on time and take care of things while my husband was away.

He didn’t have to do it alone though. My friends came and cleaned the house, brought me some toiletries and a change of clothes, and brought me home from the hospital, 3 days later. They also organized a meal schedule, all taking turns bringing my family meals for chemo days and the few days after my treatments. I also was fortunate enough that my girls and I had strong support from our dance and swim families as well.

I had help getting my one daughter to her dance lessons and the other one to swim. My doctor was adamant about me not being in the indoor pool environment and I couldn’t even go to my step-daughters swim meets. It broke my heart. But she was old enough to understand why I couldn’t be there. The risk of being exposed to the bacteria and germs floating around a warm moist environment like that, was too high. I was so touched that at one meet, the entire team made signs, supporting me and my step-daughter, and they all had worn pink ribbon tattoos.

At my daughters dance competitions, I had many other parents helping with costumes and keeping my daughter going in between her performances, when I was just too tired to go back and forth to the dressing room with her. I tried my hardest to keep up. I had to, not only for my own girls but for another dancer on my daughters dance team. The same time I was fighting, she was battling Hodgkins Lymphoma. I had to be strong to set an example. I was wearing a wig, but when I saw her up on stage, with her team mates and all their pretty, perfect buns, and she with her shiny, bald head, I decided to take the wig off and support her.

I kept working, with the exception of the few days the flu business, until I developed hand foot syndrome. One Sunday, my palms got red and started itching. The next morning, they were painful and my feet were the same. I couldn’t even hold the steering wheel, to take my 30 minute drive to work. In tears, and not understanding what was happening, I had to call in. My friend, Julie came out in the awful Oswego County weather and drove me to my doctor. I was taken out of work and put on temporary disability. A few weeks later, I also had started developing neuropathy. All of this was side effects from the chemo.

This got me pretty down. My friends and family were so good about keeping my spirits up. They continued to bring meals, help me keep my kids schedules up and just be there to talk when I needed it. Despite how awful the chemo made me feel, I never once felt alone or abandoned. It was during this whole ordeal, I really realized how blessed I was. I had all these people, taking time out of their day, to drive me to my appointments and help me care for my family. Even when I was feeling well enough to take myself, they would still come and sit with me at chemo.

Now after the chemo and 37 treatments of radiation, I am coming up on my “cencerversary”. I am cancer free. I have learned that I want to help others fight the fight. Ideally, I would love to see a world where no one has to fight cancer at all, but if I can help someone get through it, just a little easier, then I will. I haven’t figured out just how I can help, but maybe it will be just by sharing my story.