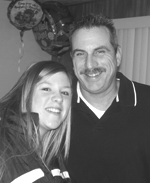 Hugh Campbell, of the Louisville, Kentucky Affiliate, has been a volunteer for 11 years. He started in 1997 with his first Race for the Cure®, where he ran in celebration of his mother, Edna, who had been recently diagnosed.

Hugh has participated and volunteered in both Race for the Cure and Rally for the Cure events. Hugh, a previous smoker, quit after his first run in the Race for the Cure. Knowing that breat cancer is was rare but possible for men, Hugh never imagined thatten years later he would be diagnosed with breast cancer.

In March of 2006, Hugh noticed a lump in his left breast and had a mammogram. The results were benign and consistent with gyneocomastia. One year and nine months later, and in much more pain, Hugh returned to the doctor and received a diagnosis of Moderately Differentiated Infiltrating Ductal Adenocarsinoma BSR grade II.

With a whirlwind of emotions, Hugh had the advantage of already being around survivors and resources of Komen Louisville. Hugh had a radical mastectomy on his left breast on December 14, 2007, followed by his first chemo treatment on January 7, 2008—two days after his 47th birthday.

Being part of a rare group of breast cancer patients, Hugh has vowed to share his experience. He and his family are documenting his journey each day with pictures to share with others who might also have to face this disease. At a recent hospital visit for a procedure, Hugh’s wife was assumed to be the patient because of the diagnosis of breast cancer. For this simple reason Hugh says, “Men need to know that breast cancer does not discriminate, it can happen to men, too. ALL men need to know that!”

Hugh is looking forward to the coming years volunteering with Komen and educating men and women alike. To quote Hugh before his surgery, “I have got God on my side and a stockin’ on my head, let’s do this!!”