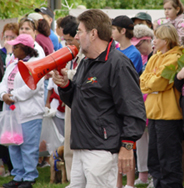 Around 1995, as the Susan G. Komen Race for the Cure continued to broaden its scope across the nation, three Tulsa residents (Barbara Schwartz, Susan Ford Bales and Bill Donahue) determined the national fight against breast cancer should be brought to Tulsa, Oklahoma. This trio knew that creating a team to pull off such an event was crucial.  One man stood out as the preeminent figure in Tulsa to approach about becoming Race Director.  That man was Jack Wing.

His experience as Race Director for the Tulsa Run, as well as other 5K’s in and around Tulsa, made him the ideal candidate for the job.  Jack Wing knew how to put on a road race!  He accepted their challenge and immediately went to work.

For each of the past fourteen years of the Tulsa Affiliate’s Race for the Cure, Jack has enthusiastically performed his duties as Race Director.  In addition to his various roles behind the scene, Jack can be found at the finish line behind the microphone, cheering participants to finish strong.  Breast cancer survivors and their supporters have come to expect Jack’s familiar voice at the end of each Race for the Cure as they run, walk or roll beneath the finish banner.

As we approach the 15th anniversary of Tulsa’s Race for the Cure on September 17th, Jack has been busily planning the logistics of this year’s Race.  His perspective this year is a little different.  Jack has been waging his own fight against cancer.  His battle is against multiple myeloma, a rare bone cancer.  Now, more than ever, he appreciates that any advancement in breast cancer research is an advancement for every cancer.

Jack has often said that he chose involvement with Susan G. Komen for the Cure because he had a mother, he has a wife, he has daughter-in-laws and he has a granddaughter – none of whom does he want to watch suffer at the hands of breast cancer.

Our Race would not be what it is today without Jack and we are pleased to present him with our first Promise of One award!