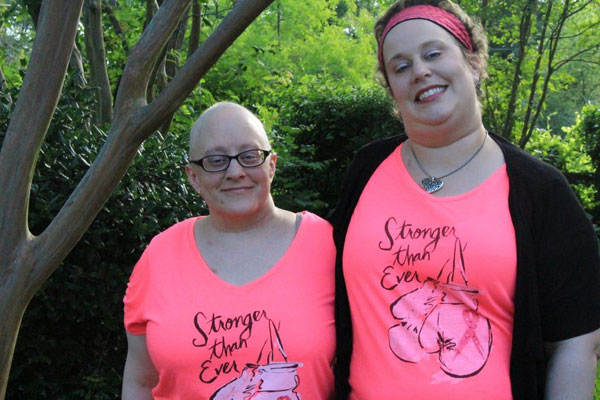 Last June at age 34 I went to my annual women’s exam I mentioned to my OB that I had occasionally felt a knot in my left breast he felt it too and thought it was nothing. Probably a fibroid or something I had been of birth control for 6 months as my husband I were trying for another baby, a sibling for our 4 year old son. Out of an abundance of caution my OB sent me for a mammogram and sonogram. A week later I went for the imaging and the radiologist said what he saw was a suspicious 3.2cm mass and he wanted to do a biopsy. The biopsy results came back the next day (6/30/15) and my world fell apart…invasive ductile carcinoma ER and PR negative (later found HER2 negative as well). This made no sense to me we have exactly 3 cases of cancer in my entire extended family, maternal grandmother diagnosed with breast cancer 20 years ago at age 65 and still alive, and a paternal aunt diagnosed with breast cancer at 70 and still alive. I had one cousin with lymphoma in his late 20’s and survived but that’s it. Now I’m looking at stage II breast cancer.

I live in a relatively small town northeast of Dallas so I went there for specialists. My breast surgeon recommended genetic testing because of my age and 3 weeks later I received the news I had a the BRCA1 mutation. Again a shock given our limited family history with cancer. During this time my doctors and I had decided being triple negative and aggressive growth rate of my tumor we do neo-adjuvant chemo. Exactly 30 days after diagnosis I started my regimen 4 dose dense AC followed by 12 weekly rounds of taxol. Had a fiasco with cold caps trying to preserve my hair which has left me with third degree burns and a small bald spot but that’s another story! With the support of my family and coworkers I worked and still do my full time job as a quality assurance manager in a food manufacturing facility and just keep positive. Everyone says I am so strong but I don’t really see it, I feel like what other choice do I have? I have a son and husband who need me!

After I started chemo I talked my sister Dana who is 8 years older into getting the genetic testing done. She had had at least one mammogram that appeared clean but still she needed to know her risk. Her test came back BRCA1 mutation identical to mine. Seeing what I was dealing with she almost immediately decided she wanted a prophylactic mastectomy and oophorectomy. Her OB was aligned but wanted her to start with a breast MRI and a sonogram of her ovaries to start the process. Low and behold the MRI showed a 1cm spot on her left breast. It was biopsied and came back the same as mine triple negative IDC but her growth rate was almost 100%. The radiologist that did the biopsy had trouble accessing the tumor it was deep inside her breast close to the rub cage I believe and she also very large dense breasts. That’s where the “miracle” comes in she would have never felt that tumor like I did. It likely would not showed up on mammogram either. If I hadn’t been diagnosed my sister might not have found her cancer until it was much further progressed. My mother has always said everything happens for a reason and she was right again!

Our mother has been our savior and our rock through this, I finished my 16 rounds of chemo on 12/11/15 and my sister started her first round on my same regimen at the same center on 12/18/15. Our mother has been there and gotten us threw 32 rounds of chemo and my bilateral mastectomy and reconstruction in January. Next week my sister has her bilateral mastectomy, reconstruction, and a hysterectomy and our mom will be there. It’s unfathomable what she has felt through all this. I keep trying to think of what I can do to pay her back and there is nothing I can come up that says thanks enough. Now if I could just get her to get the genetic test done too, she’s been so busy helping us but she really needs to help herself and know her risks too!

I know that was long but I wanted to tell the story as best I could. Probably could keep going too. Your foundation has helped my sister with her medical bill by the way, thank you for that. She is single and has a job but still difficult for her to cover everything.