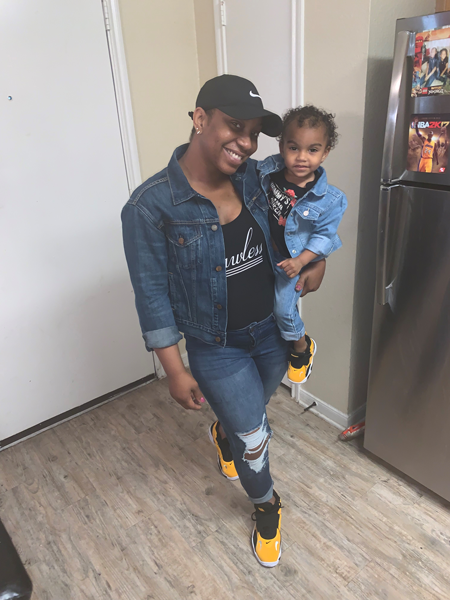 In 2015 I felt a small bean-sized lump in my right breast. I was so scared I went to the doctor to get it checked out. The doctor felt my breast and asked if I wore wired bras. I told him that I did, and he does not do a mammogram or any further testing. He tells me that it’s a cyst and prescribed me pills to shrink it. Months go by with no shrinkage but it’s still the size of a bean. I honestly stopped worrying about it because it wasn’t hurting me, and it was so small. (in-between this time I’m having fainting spells, bad hot flashes, and I’m overly tired) Then life happens, I had a gap in my insurance, so I wasn’t able to get treated.

Before I know it it’s 2016 and I’m pregnant. By this time the small bean size lump is starting to grow. It is no longer a bean size, rather is now the size of maybe a large grape. I advised my doctor of the previous lump I felt and let him know it had gotten bigger. He then feels my breast and advises me that its nothing to worry about, that it was clogged milk ducts in my breast and still no mammogram. (meanwhile I’m overly tired thinking it’s my pregnancy and I just was not feeling like my normal self) Months pass, my breast is starting to feel warm and tender to the touch and it seemed the lump is growing. I have my baby and I’m unable to breastfeed out of the breast with the lump so I go back to the doctor and let them know what’s going on and still do not receive a mammogram. I was just advised to let my milk dry up and to stop breastfeeding as if it was the milk causing the lump in my breast. I do what the doctor says and let the milk dry up and stopped breastfeeding, only for the lump to not go away but grow bigger and start hurting so bad I could barely wear a bra.

By this time my baby is now 1 and I’m in pain and have been googling my symptoms and it’s all pointing to breast cancer. At this point life happens and I again had a gap in my insurance. I went to parkland to get help (because of my insurance issue) and they tell me to be seen or even get a mammogram I will be put on a waiting list. The wait was 6 to 8 months so, at this point, I’m fearful and have already diagnosed myself but am just needing confirmation. I went ahead and got on the parkland waiting list but I knew I needed help fast. I decided to try and just pay out of pocket and it was just too expensive. I ended up contacting a doctor, explaining my situation, and asking for help pro-bono as I needed urgent care. This doctor could tell I really needed help and waived all fees and gave me a free mammogram. She then proceeded to tell me that it doesn’t look good, but she needs a biopsy on the lump to determine anything. She referred me to a doctor at Baylor, but I get there only to be told the insurance I now have does not cover the biopsy. Once again, I try paying out of pocket but it’s too expensive. By this time, I have already given the mammogram results to nursing to let the doctor look over them. Since I couldn’t afford it, I proceeded to leave the doctor’s office in tears because I know I need serious help but can’t afford it.

God sent me an angel in the form of a doctor Dr. Kristen Jones. She stopped me telling me that I needed a biopsy asap because the lump is now the size of a grapefruit. She gave me the information to “The Bridge”, which is a program that helps fund treatments and procedures needed for breast cancer. I get the biopsy done and my life is then changed forever. It’s now March 2018 and I have been diagnosed with stage 3 breast cancer. It was aggressive and by this time it had already spread to my chest plate and had attached itself to my lymph nodes under my right arm. The doctors told me that they don’t know how I survived my pregnancy, as I had invasive hormonal cancer (my cancer was not genetic, I was the first in my family) that feeds off my hormones and the reason that it grew so rapidly was because my pregnancy was feeding the cancer. Apparently, I could have died having her. I was told that if this would have been detected when I pregnant that I would have been asked to terminate my pregnancy, as it would have been a choice of life between me or my baby. Honestly, I thank God that he allowed me to make it through because I have always wanted a little girl and now, due to all I have been through, I’m unable to have any more kids.

My battle begins and I started several months of chemo which physically took me down. Chemo was the devil. I lost all my hair everywhere and I felt like I looked so bad that I couldn’t look at myself in the mirror. This put me in a deep, deep, depression resulting in a massive amount of weight gain and even suicidal thoughts. Then I had several surgeries, one to remove both my breasts and my lymph nodes under my right arm. This caused me to now have lymphedema in my right arm so the blood will not flow right for the rest of my life. I then had my breast reconstruction and, while they don’t look the same, it’s something that I must live with. Oh, and I finally came up on parkland waiting list June 2019. Then I had to go through 3 months of radiation, and it burned me so bad that I’m literally 50 shades darker. But God held me together, he fought this battle with me and for me and I can finally say I have won this battle. I got my victory, I have beaten CANCER . Kandra strong is truly how I feel now that I have fought like a girl and won this fight. For anybody fighting this fight continue to fight and push through your toughest battle. Remember God gives his hardest battles to his toughest soldiers. Tough times don’t last but tough people do. Be encouraged as you will win this battle.