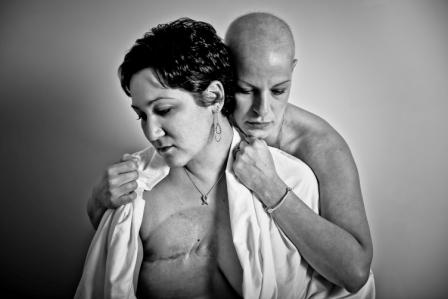 Breast Cancer Does Not Discriminate

One year ago today, June 29th 2013, my life flipped upside down. I spent an impromptu day downtown with my brother, sister, nieces, and nephew. We had one of the greatest days of my life. It was spontaneous and perfect and I loved every second of it! At the end of the day, I asked my sister to look at my boob. I had been worried about it for weeks, but made excuses that it must be nothing, though in my gut I knew something was wrong. The first second Kim looked at me, her eyes said it all. She immediately got on the phone with a nurse she works with. It was a Saturday night. We got in touch with a general surgeon that Saturday night who was kind enough to schedule me for that Monday to have a biopsy done. I have never been more nervous than I was that Monday afternoon, July 1st 2013. I had no idea what was in store for me, but I knew, in my gut, that it wasn’t good. He stuck a needle in me in 7 places to extract cells from the mass. He also performed an ultrasound. Lying on that table that day, I knew. I didn’t know for sure what was about to happen, but I knew it wasn’t good. The following day, I had my first mammogram, all bruised and sore from the biopsy the day before. At 35 years old, a mammogram should not take more than 10 minutes. I was in that room for at least 25. After sitting in the waiting room for about 10-15 minutes, I was told they needed more pictures. Back to the mammogram room I went. After that, a radiologist read the pictures and requested that I get an ultrasound, today. I was on that ultrasound table for at least 45 minutes, having to remain still the entire time with the wand smashing into my bruised, swollen, very sore boob. My Mom and sister sat quietly in the room. Once the ultrasound was read, all 3 of us met with the radiologist in her office. She stated the final results would be back in a few days. But there are many spots that look suspicious. An MRI would be able to tell with more certainty. My MRI was scheduled for July 5th 2013, only 4 days after my initial biopsy. My life changed that day, June 29th. No one confirmed it was cancer, but I knew. I knew. Three days later, on July 3rd 2013, the general surgeon, who performed the initial biopsy and ultrasound, met with my entire family in his office, after hours, to give us the official results from the biopsy. The ride up the elevator felt like an eternity. I knew the results were bad. Just give it to me straight. And he did. And there was a lot of silence. He referred me to an oncologist. My first appointment with the oncologist was awful. I was angry, and scared. I was crabby. And I did not want to be there. I was pissed that I had to fill out yet another medical history. Don’t they have my information in the computer? Why do I have to fill out yet another form stating I have cancer? At 35. I made Kim complete the form. The oncologist explains that because of the size of the tumor and lymph node involvement, I have Stage 3 breast cancer. To me, cancer is cancer no matter the details. The course of treatment would be chemo, surgery, radiation. I couldn’t get out of that office fast enough. My family asked a few questions and everyone looked at me. I don’t want to be here. I just want to go home. It is what it is. And I will face it as it comes. But for now, today, I want to go home. Where I am safe. And life is as I knew it. That was a year ago. A lot has happened in a year. I was faced with the hardest, unwelcomed challenge of my life. But I know that I am stronger and better because of it. And my life will never be the same. I have a new normal. I have learned a lot in the past year. And what I hope is that I can help someone else. Help to educate. Help to console. Help to inspire. But most of all, to remind you to CHECK YOUR BOOBIES. Breast cancer happens to 1 in 8 women. And that’s just too many. Without any family history, my first cousin was diagnosed only 10 months after me with the complete opposite diagnosis of triple negative ductal breast cancer. I began my journey only 3 months after my 35th birthday. She began hers only 2 months after her 35th birthday.