While Komen Scholar Dr. Julie Palmer attributes her mother’s breast cancer diagnosis as the reason why she became a breast cancer researcher, she points to her late sister’s metastatic breast cancer (MBC) diagnosis and passing as to why she will dedicate the rest of her career to researching the disease.

MBC is breast cancer that has spread to other parts of the body. Today, there is no cure. It has been three years since Julie lost her sister, Beth, to the disease. Though Beth’s life was cut short, Julie takes comfort in knowing her sister lived every day to the fullest.

“One thing people would never say about Beth is that she left anything undone or that she wished she would’ve had more time to do something else in her life,” Julie said. “She did it all. She was always doing all the things she loved.”

Beth pursued a successful career as a lawyer and ultimately served as an administrative judge in the Equal Employment Opportunity Commission. But her first love was playing bridge. During Beth’s bridge career, she won seven world championships and more than 25 national championships, saving all her vacation time to travel the world to play in tournaments.

“She was an acclaimed bridge player. She won many international titles and represented the U.S., and she continued to do that while living with MBC,” Julie said. “She was just a very active person and an extrovert. She had a lot of friends, and she liked to socialize. Above all, she was a wonderful mother to her daughter.”

Beth was first diagnosed with early-stage, estrogen receptor-positive breast cancer in 2001. Though the cancer was barely invasive, Beth opted for a double mastectomy because of her mother’s history of having two breast cancers — one in each breast — occur years apart during her life.

“I arranged for Beth to see an expert in the field at a nearby comprehensive cancer center, who agreed with her original oncologist that chemotherapy was not needed,” Julie said. “Beth recovered from the surgery, and because our mother had lived to age 93 and died from old age, we thought that would be the same for my sister.”

Beth returned to her bustling life as an international bridge champion. Nine years later, she discovered small lumps along her mastectomy incision line.

“We know now that estrogen-receptor positive breast cancer tends to recur late, which is why women need to be monitored for the rest of their lives,” Julie said. “She called her doctor, and they sent her for a PET scan. That’s when they discovered it was in her lungs and her bones. That’s the definition of MBC. I knew immediately, and I think they explained to her that this was a death sentence. We were devastated.”

But Beth’s eternal optimism and endless energy meant she refused to see her MBC diagnosis as a reason to stop traveling the world and pursuing her dreams.

“Her oncologist wisely refused to give my sister an average amount of time she would live,” Julie said. “My sister was one of those people who would say, ‘Give it to me straight; just tell me the truth.” And the oncologist told her, ‘I won’t because we don’t know. The number of years people can live is changing all the time.’ Still, we didn’t actually think she would live as long as she did.”

Beth ultimately lived for nine years after her MBC diagnosis, continuing to win multiple world and national championship bridge titles while balancing her chemotherapy treatments. She also underwent surgery to stabilize her spine after the tumors continued to spread.

“During her treatment, my sister traveled to India and other countries for bridge tournaments,” Julie said. “Her doctors were always able to arrange her chemotherapy around that because she was usually going two out of three weeks for different infusions. She never missed a single tournament.”

In the last two years of her life, Beth gradually started “to get sicker — the way people do when the body just can’t bounce back as much,” Julie said. Beth was hospitalized multiple times but managed to garner the strength once more to take her trip of a lifetime to Alaska with her daughter.

“She called me from the airport in Juneau when she was done, and she sounded so great,” Julie said. “She did the trip she always wanted to do. And then a few days after she got back, she was back in the hospital.”

Beth passed away three months later at age 67 after living nine courageous years with MBC. While the pain of losing her sister is unbearable, Julie is determined to continue her work as a cancer researcher at Boston University in Beth’s memory.

“I can’t stand that she’s not around, but I really thank all of the oncology researchers and basic scientists who are doing the research that has led to medications that help to treat MBC. Since my sister passed away, I’ve met many people who have lived even longer with MBC — 15 years or longer.”

But MBC remains a terminal illness, and Julie knows her work is far from over.

In the three years since her sister’s passing, Julie said spending time with Beth’s daughter, Julie’s niece and godchild, has helped her heal.

Julie’s family gathered this year on Beth’s birthday to look through old photo albums and remember what a bright light she was in their world.

“Sometimes just talking with other people who have had the same experience helps,” Julie said. “You miss the person, and you hurt that they’re not here anymore – that you’re here and they’re not. It’s just hard to accept that my sister isn’t here anymore. We were very, very close. She was my person. I still miss her all the time.” 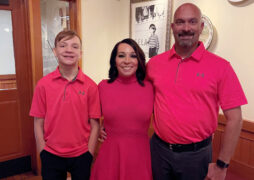