Paris has a history of papilloma, a type of benign tumor, so earlier this year, when she felt something unusual on her right breast, that’s what she assumed it was. But when a second bump appeared, Paris called her doctor. What followed happened quickly—a mammogram, a biopsy, a breast MRI. And then, a breast cancer diagnosis.

The moment she learned her diagnosis stands out for Paris. “I was at work when I got the call. I could not stop crying. I was hyperventilating,” she said. “I don’t have a family history. Nobody in my family has cancer.”

The weeks following her diagnosis were difficult. “It was back-to-back appointments,” Paris said. “I didn’t really have time to take in what was going on, that I had breast cancer.”

Because of the size of the tumor, her doctor started her on chemotherapy immediately. Her doctor told her that during her second week of treatment, she’d lose her hair.

“It happened exactly then,” Paris said. “I’d been growing my hair out and it was exactly how I wanted it.” At first, she tried to hide her baldness. “I knew it was going to happen, but I wasn’t ready,” Paris said. She remembered combing her hair and strands falling out. “I felt like losing my hair, I was losing a part of myself,” she said. She began wearing scarves and wigs.

A friend of Paris’ reached out and scheduled a photo shoot for her. When the photographer arrived, Paris had on a wig. “He was like, ‘Come on, embrace this,’” Paris explained. “He told me to take the wig off. And that’s what I did. At first, I didn’t know how I would feel, but it was very empowering.”

In the photographs, Paris glows. “It’s a rough moment, because nobody wants to lose their hair, it’s a part of who we are,” she said. “Your hair will grow back. You have to embrace the journey you’re on, not feel like all hope is lost, because it’s not.” When she looks at the photos now, she sees a beautiful, bald and bold woman looking back at her.

“Having breast cancer sucks and I never thought I’d have it in a million years, but there’s a purpose for everything you go through,” Paris said. “I find the beauty in that. I find positivity in it.” 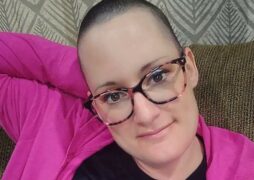