Breast cancer is an incredibly unique and personal experience. Even though we share a common bond of diagnosis, we each go through the process and journey differently.

My journey began in September 2019. I had just started a master’s program to become a school counselor and felt I was on such a good and positive path. One day I felt pain in my left breast. When probing the area, I thought I felt a lump, but wasn’t sure. I tried to brush it off and figured it was just another odd occurrence in my body. I was scheduled for a routine mammogram a few weeks later and figured if anything were there, it would show up on the mammogram.

Before the appointment began, I filled out a form about my medical history, including an area asking if I had felt a lump. I hesitated in answering that question since I thought the lump was a fluke, but I trusted my gut and checked “yes.” The mammogram tech placed a marker next to the area where I thought I felt the lump, I finished the appointment and then the waiting began. Even though the mammogram came back clear, I was sent to get an ultrasound to check the area where I felt the lump. It was during the ultrasound that they saw something.

Fast forward to a needle biopsy, and then the dreaded call that I had breast cancer. I then had to decide between a lumpectomy or mastectomy. After much deliberation and conversations with other survivors, I chose a mastectomy. It was the best decision I could have made. A few weeks after the mastectomy, the pathology came back that I had aggressive invasive breast cancer, and that it was hormone receptor-positive. A day later the genetic results came back that I had the BRCA1 gene mutation. My simple plan of “just” having a mastectomy changed rapidly. I now needed chemotherapy due to the cancer’s Oncotype, a second mastectomy and an oophorectomy (due to my increased chances of a recurrence from the gene mutation).

To say it was a whirlwind of events is an understatement. It all happened so fast that I wasn’t able to process what was going on. The one thing I held onto was that I was going to be OK because that was the only option. I never once thought about cancer winning, again it wasn’t an option for me.

During chemo there were times when I wanted to give up, there were times when I didn’t think I could continue. I had to find ways to remain positive. I had to dig deep, find my inner strength and think about the big picture. I had to think of cancer as a temporary setback, not a life sentence. I thought of my children constantly and wouldn’t accept anything less than being around to see them grow up. I also had the distraction of my master’s program and the determination to get through and not let cancer win. I wasn’t about to let cancer take my dream of becoming a school counselor away from me.

I decided to make my last day of chemo a celebration. I bought a pink wig online, wore a shirt with the message “Find Your Inner Strength,” and proudly wore my Wonder Woman tiara. I needed to end that part of my journey on a high note. I needed to celebrate the fact that I didn’t quit, that my body was able to get through the treatments, and that my will to fight hadn’t been diminished. I also brought miniature bottles of sparkling apple cider with me to my last treatment and handed them out to the nurses.

My journey isn’t over. I’m still waiting to have my oophorectomy, and my expansion process has been put on hold due to COVID restrictions. I will also be on hormone blockers for the next 5-10 years to help prevent a recurrence. But that’s OK, it’s what I need to do to have a long and happy life.

I consider myself to be lucky. Lucky that I caught my cancer early. Lucky that I trusted my gut and checked the box at the initial mammogram. Lucky to have a second chance.

I just completed my first year in the master’s program and have one year to go. Next year is a big one for me. I will turn 50, graduate from the master’s program, and hopefully have all of my surgeries behind me. It’s a new beginning, a time to move forward remembering what I’m capable of and knowing just how strong I am. 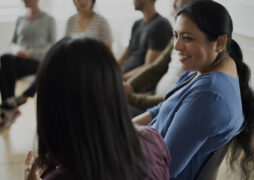