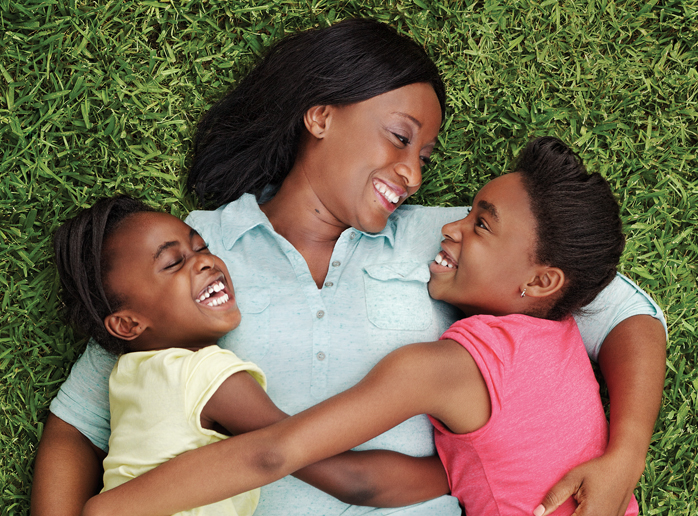 Juliet Uzoma-Aguwa moved from West Africa to the U.S. in 1996 to get an education and a better life. By 2008, she was married, had two daughters and was living the life she’d always hoped for. But after a clean routine checkup, she sought a second opinion on a lump in her left breast. An MRI and biopsy revealed that it was breast cancer. This is the story of a determined mother showing her daughters how to live as strong women. This is Juliet’s story, in her own powerful words.

On receiving her diagnosis

I actually thought I would go straight back to work after I heard the news, because I believed that it was going to be negative, but of course it was positive. I remember walking out of the clinic without even saying a word to my husband. And my husband didn’t know what to say to me.

My surgeon told me that I had about a week to make a decision, because I had stage III‑C, which was almost stage IV. That means it had spread to my lymph nodes. At the time, I had talked to my husband about a mastectomy. I said, “What do you think?” He said, “I want my wife. What good are the breasts to me if I can’t have my wife?”

On telling her family

My children were 1 and 3 at the time. How does a mother explain to a three‑year‑old that she has breast cancer?

My oncologist gave me this children’s book that was about how “the boogeyman attacked Mommy’s boobs”. So I read it to my daughter. I’m not sure if she really did understand the concept of breast cancer, but she knows the boogeyman is nothing good. So, that’s how I was able to tell her.

My family’s reaction to the news was very painful. At the time, I remember trying to shut the whole world out, because coming from Africa, cancer is not something that we consider to even have a second chance. It’s a death sentence—once you have it back in Africa, you just count your days. A lot of the women in Nigeria have been kicked out of their homes because either the husband or family members think they have a curse. That’s just the perception over there.

I called my mother and said “I have something to tell you.”

She said. “What? You’re pregnant again?”

When I told her, she broke down on the phone.

My mother was with me through my whole journey. She went through the treatments with me. She said, “I have buried my husband. I’m not going to bury my daughter.” And so she came to the United States.

My sister came from California to be with me through the surgery and the mastectomy. After the mastectomy, I started with radiation — it was supposed to be six weeks, but it lasted a little longer, because while I was going through the radiation, it affected my esophagus. I couldn’t drink or eat. It was very hard for me to swallow, because I think the dose was too much for me. So the doctors gave me a break for about a week or two so I could get myself together again and continue the radiation, after which I started chemotherapy.

After the first dose of chemotherapy I turned to my husband and I said, “That’s it? I’m not feeling anything.” He said, “Well, give it some time.” A few hours later I was literally on the ground, weak. A fly could just land on me and I wouldn’t have the energy to swat it. I was that weak. Then it just continued. During chemo, I had memory loss. I couldn’t remember my children’s names. I would have to sit down for a while and think, then possibly ask my mother what their names were.

Aside from the memory loss, I lost my hair, lost everything. Before cancer I always adored my long hair. But then when I went through chemo, it taught me that aside from the long hair and all the makeup, I was still beautiful underneath with the baldhead.

On taking her kids to chemo

The few times that I had them at the hospital with me, I was pretty weak. And my kids were just there in a stroller. I learned about Nurses Affecting Change, and one of the ladies, Dr. Sandra Underwood, approached me and said, “How can we help you?

I said, “If my kids don’t have to watch me go through chemo, I think I can deal with everything else.” So she introduced me to Susan G. Komen. They funded the organization that provided daycare for my kids while I was in the hospital.

My daughter said to me, “It’s just cancer. Why won’t you play with me?” I learned to drop whatever I was doing and just be there.

My daughters give me inner-strength. I look at them and know that my journey will be passed down, so they can tell my story and understand that breast cancer is not a curse.

I have also come to understand that one of the things I neglected before cancer was myself. Without me, all these other people I love would not exist. I have to take care of me so I can have the strength to be there for them.

What I would say to someone recently diagnosed with breast cancer?

Never give up. It’s going to be okay. We’re going to go through this together.