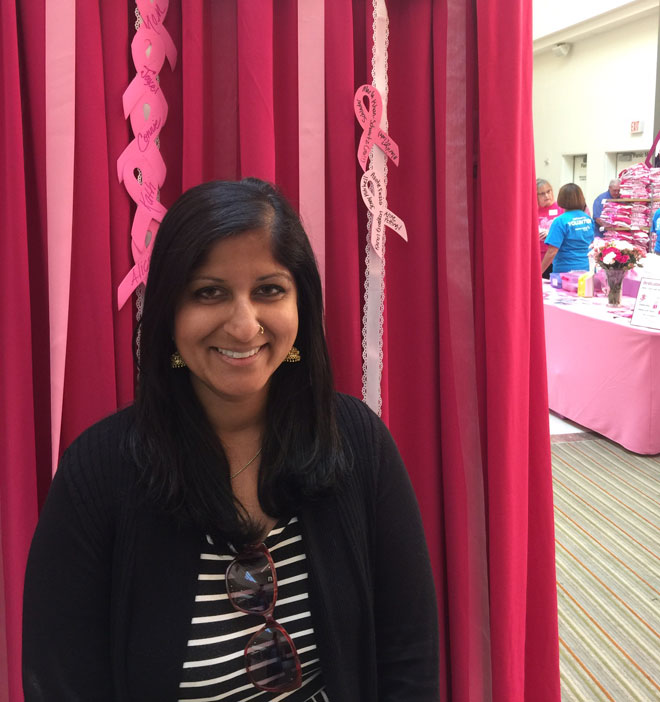 The words “good morning” mean a lot to me. I never thought I would appreciate these two words so much. Why? For me, it means the beginning of a new day. A day that I have not experienced yet, but know I will get the chance to experience.

My name is Marla and I am 40 years old. I am a Social Worker by trade with a graduate school background in psychology and public health. I have an amazing husband, Michael, a beautiful 4-month-old son Ari, a 2- year old son Kiran, and a fun and charismatic step-daughter named Ivy.

And the timing of it? Well, when I was 35, I was launching the next phase of my life… my fiancé at the time (now husband) had just moved in, we were trying to have a child, and life was the perfect mundane.

I’ll never forget the day we discovered the lump. It was Easter weekend, March 28, 2013. We had just returned from dinner with friends and we were changing into pajamas. As we were changing, my husband playfully grabbed at me. As he did this, he had a moment of concern on his face. I will never forget him saying “What is that? I just felt something really hard.”

Then I felt it, and there it was…the lump. I had always wondered when I was in health class what a breast lump would feel like. How would you know what it was? What would it feel like? Is it obvious? Would I miss it during a self-exam, since I don’t know what it feels like? Why isn’t there some sort of CPR like doll that has a breast lump demonstration so I knew what exactly I was looking for?

Well, there it was. I didn’t need the breast lump demonstration doll. I had a lump in my left breast, and it was the most abnormal thing I had ever felt. There was no mistaking that there was something there.

I called my primary care RN line first thing the following Monday morning. I was nervous but everyone I knew kept saying, “don’t worry about it, you’re too young. You have no family history and once you go in, it will get resolved. It’s probably just a cyst.”

The RN wanted me to come in right away but I was reluctant because I was about to leave for a week of vacation and in the back of my mind I was pretty convinced that it would just go away.

I went on my trip, we took my step-daughter to Disneyworld for the first time. We spent time with my family and celebrated my father’s 70th birthday. We were so busy but weighing at the back of my mind ALWAYS was this lump. This lump that was not going away. As the days got closer to our return, my anxiety grew and grew. My friends and family continued to reassure me not to worry, but it was impossible not to. This was the most poignant symptom of abnormality I had ever felt.

During my mammogram, I saw the lump when the tech pointed it out to me. Next, I had the ultrasound. I started to worry during the scan. The tech asked me to wait a few minutes and suddenly, a radiologist appeared to tell me that what he thought he saw was breast cancer and that he’d like to perform a biopsy. And he did. Right then and there, he performed a biopsy on the spot and within 24 hours, I had a confirmed case of breast cancer.

Breast Cancer Stage 1 – Grade 3… an aggressive form of cancer. I am so lucky that my cancer was discovered in time. Had I waited, had we not found the lump when we did, my life story at age 35 would have been very different.

The next couple weeks were a blur. I had to have MRI’s, another biopsy, doctor’s appointments, decisions, sometimes a fine Cabernet. It was like a full-time job and it was pretty overwhelming. Here I was trying to learn about my options, make decisions and deal with all the emotions that come with the words “breast cancer.”

What a juxtaposition, one week I was incredibly joyful. I was engaged and planning a wedding, trying to have a child, and then two weeks later I was having to change the course of my life to include words like, “lumpectomy”, “chemotherapy”, “radiation,” “the possibility of not having a child or a future.”

The fact that I didn’t have to wait for tests or results was also something really important. When you’re going through something like this, you have to know immediately, you just have to. Good news or bad news – waiting was the worst part. The ambiguity was enough to kill you alone.

Two weeks after I was diagnosed, I had a lumpectomy. One month later, I had four rounds of chemotherapy, and then following that I had 6.5 weeks of daily radiation.

During all this, I worked full-time, continued to plan my wedding, learned all I could about breast cancer, my options and the latest research, and I also ran.

I was not going to let my cancer or my chemo or radiation get the best of me. I am a runner and I ran a 5k after each chemo round right up until my next round. Running made me feel normal and it actually curbed a lot of my side-effects.

My family support system was also incredible. My mother stayed with us for 3.5 months, my step-daughter was fun and supportive, my husband shaved my head and then his, attended every MD appointment, chemo round, and as many radiation treatments as he could to support me. To this day, he continues to attend all of my appointments. His kindness and love affected my treatment process and recovery in a very positive way.

After spending 7 months putting one foot in front of the other, my treatments finally ended and I was left with the realization that I had just had cancer. It didn’t really hit me until then and I was left in shambles. It’s that question of “now what?”

Here I was, a young woman in her mid-30’s, having just completed breast cancer treatment mixed in among a lot of other older women. And while we had a lot of similarities, most of the women I met were older and in different places in their lives with different decisions to make. As a young woman, I was worried about having children for instance, as well as facing early menopause, and relationships.

And then, in January 2014, I suddenly found out I was pregnant. It was a complete surprise and an amazing gift because I thought that chapter was closed in my life after my cancer treatment. In September, I had a beautiful, healthy boy named Kiran. It was my dream come true and a bittersweet end to the pain of cancer and the devastation that it brought to me at that time not knowing if having a child was an option. I was fortunate enough to also have a second child in March 2017 named Ari. Both of these babies are amazing miracles to us, as we were not sure if we could ever conceive after chemo.

Amidst the busyness of parenting and working full time, something still weighed at the back of my mind. I still thought of the aloneness I felt as a young woman and not knowing anyone that was going through anything similar that I was at the time of my treatment and beyond. This inspired an idea to form a support group for young women dealing with breast cancer. I spoke to the nurse who called me with my diagnosis and within months, we planned and executed our idea and we now have a Young Women’s Cancer Survivor’s Group that meets monthly. It has been amazing to see the connections that the women in the group have made and the positive feedback that we have received. And for me, it’s a way to give back and continue to get support that I need as a young woman/now survivor.

I might also add that it is actually devastating to see how many women are diagnosed at an early age, there are a lot of, which leads me to this…

Several things have been realized throughout this journey:

– If it were not for my husband, I would not have discovered this lump in a timely manner. It is very common for your partner to discover a lump.

– If it weren’t for my primary medical doctor, who referred me to the breast center, I would not have had a mammogram or ultrasound – a decision that ended up being potentially lifesaving to me.

– Just because you do not have a family history does not mean you are safe from this devastating disease. It can happen to anyone at any age.

– My core treatment team at the hospital I received treatment at has worked with me to make decisions that also include my ideas and what I feel is best for my health. The care I have has been amazing.

– Future prevention is key and promoting this idea to other women is essential in the fight against breast cancer- whether this be through early detection, mammograms, and other essential tools- a primary approach will save the lives of many.

– The fight to cure breast cancer will be a battle for many years to come, but it is a situation that can affect anyone.

– Education, early detection and primary care versus tertiary care, will lead to better outcomes, and save lives.