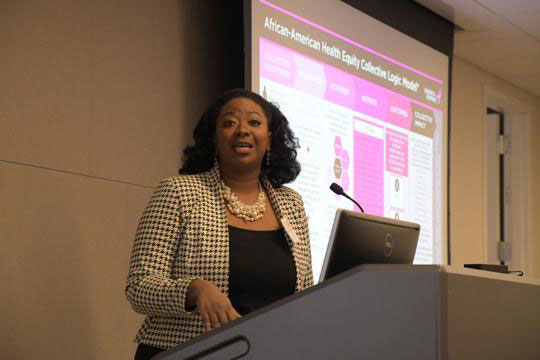 Shyrea Thompson’s course to Susan G. Komen began when her sister, at only 13 years old, found a lump in her breast.  After a lumpectomy and biopsy, their family thanked God that the mass was benign and for the access to world class health care. Thompson’s journey with her sister sparked a passion for health equity, to ensure that where a woman lives, doesn’t determine if she lives.

For more than 15 years, Thompson’s career in education, health, advocacy and outreach, took her to from her home in Massachusetts, to Washington, D.C. and New York serving in a variety of front-line roles. Prior to joining Komen, Thompson’s unique perspective and insight into public-private partnership development expanded the District’s only federally funded Area Health Education Center. Serving as Program Director then transitioning to Executive Director working in underserved communities in our nation’s capital.

During her time at AHEC, she co-founded the DC Pink Divas with a Susan G. Komen Community Grant to create an education, navigation and lay health worker training program that has since impacted more than 10,000 lives. After 3 years as a Komen National Capital Area Grantee she was honored to join Komen to lead the organization in its goal to achieve breast health equity and serves as the Senior Director of Strategic Initiatives. In this role, Thompson leads the African-American Health Equity Initiative, which includes a $27 million partnership with the Fund II Foundation to save lives in the communities with the greatest breast cancer disparities.
Thompson’s drive to create access to timely high-quality health care led to her leadership on the implementation of the Affordable Care Act, which was recognized by Vice President and Dr. Biden. Thompson volunteers with a host of nonprofit boards and community organizations. In 2016, she was honored to be selected as one of the National Minority Quality Forum’s 40 Under 40 Leaders in Minority Health, awarded by the Congressional Black Caucus Health Braintrust.
Thompson earned her B.S. in Criminal Justice from The George Washington University in 2004, and completed her graduate studies in Nonprofit Management in 2009. Shyrea and her husband are proudly raising their 8-year-old twins in Washington, DC with the same commitment to community that was ingrained early on by her parents and grandmothers.