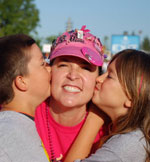 When she was only 38, Sonia was diagnosed with breast cancer. This young mother of two entered the race of a lifetime in her passion for beating the disease.

Once Sonia’s personal battle was over, she committed to winning the war. She leads the largest race team, which is includes many woman diagnosed in their 20s and 30s. From huge BBQs to selling pink ribbon cookies year-round, Sonia’s fundraising never stops. In the past six years the Rac Pac has raised about $175,000. Her team had over 350 members in 2010, and the team raised almost $50,000.

“Unfortunately, the Rac Pac keeps growing,” Sonia once said. “Don’t get me wrong – I love having new members and seeing the fundraising go up. But the reason why our team is growing is because more and more younger women are being diagnosed. I started the Rac Pac to honor a friend, and within six months it was me. Then another friend, another teammate, a friend of someone on the team. I can’t stop until this is over.”

There isn’t anyone Sonia won’t talk to about breast cancer – about early detection, about going to fundraising events, about volunteering, about sponsoring, and about giving.

Sonia’s efforts to support women personally are also compelling. She is part of a young survivors group, and she freely hands out her phone number to anyone who might need to talk. Each time she hears about a new diagnosis, her resolve to win the war is even stronger. She truly believes that she cannot rest until there is a cure.