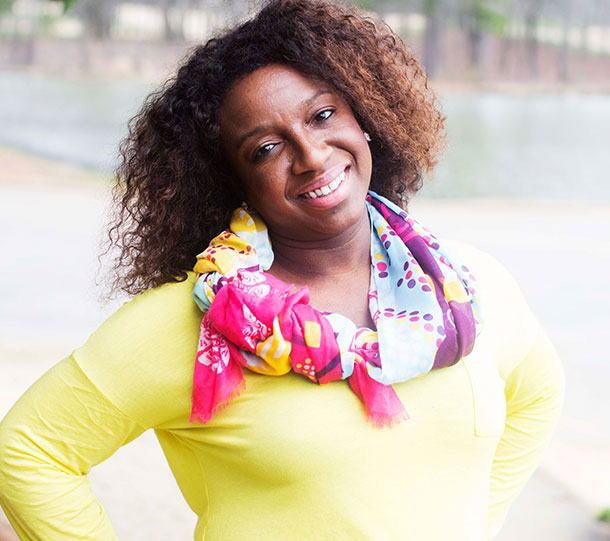 TeMaya Eatmon was living the dream. At age 36, she had a great job. She got married in July 2012 and honeymooned in St. Lucia. And two months later, when she went in for her annual gynecological exam concerned about discharge from her breast, she learned it was because she was 6 weeks pregnant.

But the fairy tale soon went desperately wrong. The baby’s development was behind schedule, and pregnancy ended in a miscarriage. Because the discharge from her breast began to have some blood in it, she was sent immediately to the Breast Center.  The good news was that the biopsy showed the lump was benign.

The lump was removed in December 2012 during a previously scheduled surgery to remove fibroids on her ovary. Everything went well, she was home in three days, and getting back to normal. Then she got a call from a nurse. The bad news was that she had breast cancer. The good news was that she had highly treatable Stage I DCIS, or ductal carcinoma in situ, a non-invasive cancer where abnormal cells are in the lining of the breast milk ducts, but have not spread to surrounding breast tissue. Treatable, yes, but the normal protocol would have been radiation and tamoxifen for five years. But TeMaya wanted to have children, and waiting to be off tamoxifen for a year before trying to conceive again would have put her at higher risk based on her age.  So, instead, she opted for a bilateral mastectomy and no radiation.

That’s where Piedmont Hospital’s Breast Cancer Nurse Navigator Geri Savitske stepped in.  She could see that TeMaya needed support. She was not comfortable surrounded by much older women in the Breast Center. Geri told TeMaya about the Young Survival Coalition, and prodded her to get involved in being an advocate and helping others. “She was there with me the whole way,” TeMaya says. “If it wasn’t for her, I wouldn’t be able to talk about this today.” TeMaya learned about the Living Beyond Breast Cancer Young Advocate program for women under 40 diagnosed with breast cancer.  She got involved with Living Beyond Breast Cancer; served on the board and the grant committee for It’s the Journey; joined Sisters of Promise, part of Susan G. Komen; and has attended and spoken at many local, state and national conferences and advocated for more cancer research, especially as it relates to younger people.

Four years out, living with her cancer experience is still a struggle. “I still have good days and bad days.”  She’s had difficulty getting pregnant, including two failed invitro fertilizations.  Just being back in a medical setting takes her back to her cancer treatment. “I put on a happy face, but inside I am hurting.”

Through her involvement, she’s made many new friends with whom she’s had a shared experience. They meet at conferences and stay in touch on social media. Telling her story has given her and others renewed strength. Still, her heart goes out to those who have faced even more difficult circumstances. A woman 10 years her junior wasn’t visited by her parents for two years because, in her culture, there was concern about being with someone who had cancer.  She was only 29, and last year, she passed away. TeMaya also lost a friend who had a 7-year-old child and another had a recurrence and was told the cancer had spread.  “We are in a fight for our lives,” she said.

The message she shares with other young survivors is that “you are not alone.” While everyone’s journey is different, she assures them that there is someone out there who is in a similar situation. “You have to put yourself out there and tell people that you need help. Go to a support group, even if you just listen.”

TeMaya is also an advocate for those less fortunate socioeconomically. “Where you live, what your age or race is, or what you earn shouldn’t determine whether or not you live” when you are diagnosed with cancer, she believes. “Healthcare disparities are very real, I see people who are not getting the same attention and care I got. When you are on Medicaid, your options are limited.”