Most triple negative tumors are basal-like (see figure below). Basal-like tumors have cells that look similar to those of the outer (basal) cells surrounding the mammary ducts. 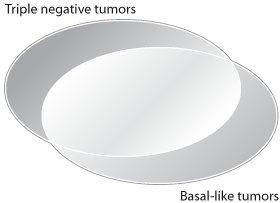 Triple negative/basal-like tumors are a molecular subtype of breast cancer.

How common is TNBC?

Most breast cancers related to a BRCA1 inherited gene mutation are both triple negative and basal-like [59-61].

Early TNBC is more likely than early ER-positive breast cancer to recur, at least within the first 5 years after diagnosis [46,50,53].

Early TNBC is aggressive, but it can be treated effectively. It’s usually treated with some combination of surgery, radiation therapy, chemotherapy and immunotherapy.

Early TNBC is treated with chemotherapy. People with TNBC tend to get more treatment benefit from chemotherapy than people with hormone receptor-positive breast cancers do [53].

For people with TNBC who have cancer remaining in their breast after neoadjuvant chemotherapy, treatment with the chemotherapy drug capecitabine may lower the risk of recurrence and improve survival [14,67].

Pembrolizumab (Keytruda) is an immunotherapy drug used to treat early TNBC at high risk of recurrence. It’s given before surgery, as part of neoadjuvant therapy.

Learn more about pembrolizumab in the treatment of early TNBC.

Treatment for metastatic TNBC includes chemotherapy. It may also include other drug therapies.

Learn about chemotherapy in the treatment of metastatic breast cancer.

Learn about emerging areas in the treatment of metastatic breast cancer.

The immunotherapy drug pembrolizumab (Keytruda) is used to treat some metastatic TNBC.

Learn more about pembrolizumab in the treatment of metastatic TNBC.

Learn about sacituzumab govitecan in the treatment of metastatic breast cancer.

Clinical trials for people with TNBC

Clinical trials are studying treatment for early and metastatic TNBC.

After discussing the benefits and risks with your health care provider, we encourage you to consider joining a clinical trial.

Learn more about what Komen is doing to help people with breast cancer find and participate in clinical trials.

Prevalence rates show the proportion of people who have a breast cancer (or other health condition) at a given point in time. Prevalence rates of TNBC differ by race and ethnicity.

Triple negative tumors appear to be more common among non-Hispanic Black and African American women (especially before menopause) compared to women of other ethnicities [51-56].

Learn more about numbers versus rates when looking at breast cancer statistics.

Although the reasons for racial and ethnic differences in rates of TNBC are not clear, some lifestyle factors may play a role [58-62].

Compared to white and non-Hispanic white women, Black and African American women tend to have lower rates of breastfeeding and tend to carry excess weight in the abdomen area [63,69-73]. Each of these factors may increase the chances of getting TNBC [53,69-73].

These topics are under study.

Higher rates of TNBC may explain, to some degree, the poor prognosis of breast cancers diagnosed in younger Black, non-Hispanic Black and African American women [54,63-65,78-80].

Even among women with TNBC, African American women may have poorer survival than white women [81].